So –  there is a very slick body kit made to match the group 5 racing version of the x 1/9 introduced back in 1975. The Icsunonove Dallara. The original Dallara was essentially a stripped down and customized x chassis and built back up with a  fiberglass body. Keeping the weight around 1500 lbs all-in. Dallara toyed with a couple of engine specs, but eventually finalized on a 1600cc 16v high revving monster for 230hp at 10k rpm! That’s a power to weight ratio of 1.53 hp per 10 lbs of car. 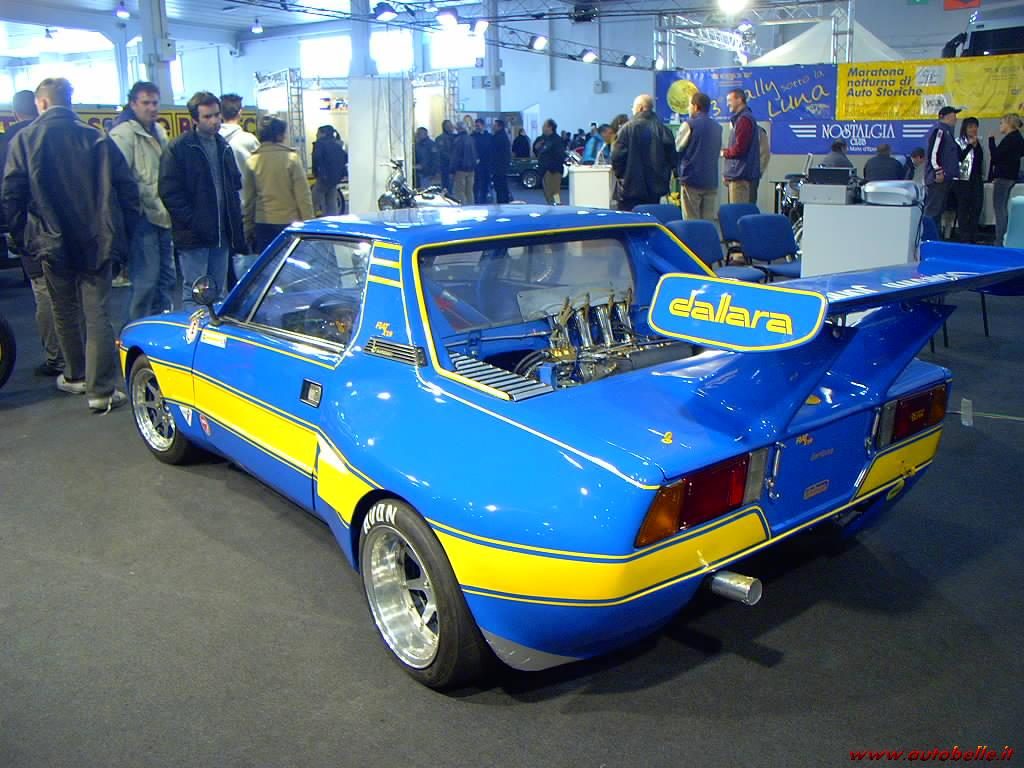 The signature wide fenders (not flared) and rear wing make the Dallara the most distinct looking version of the x 1/9, followed closely by the Abarth Prototipo Rally car.

The look inspired a body kit that can be fitted to any year model x. Although not quite as aggressive in width, the kits on the market are a very close copy and right away add a look that screams speed and performance. I particularly like one a local Fiat guy in Santa Cruz name Chris Obert @ FiatPlus built some years back. I was lucky enough to ride in it at an auto-cross event in Santa Clara, CA. 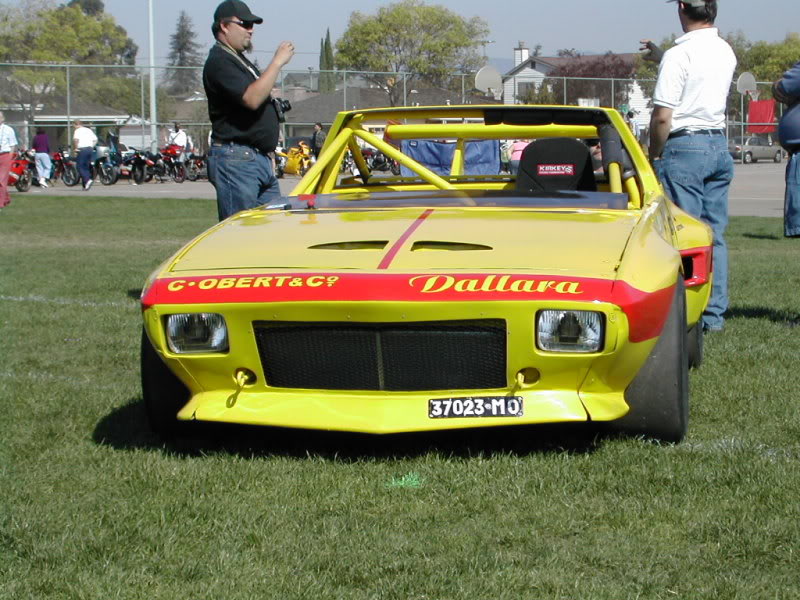 Can’t tell you what’s under the hood; it’s a secret! – well, not really. I just don’t know actually. I do know that it was a FAST and FUN ride.

Another famous and currently raced Dallara bodied X is driven by Di Fulvio Racing. Very competitive racing company who totally embraced the magic of the Dallara made little rocket. 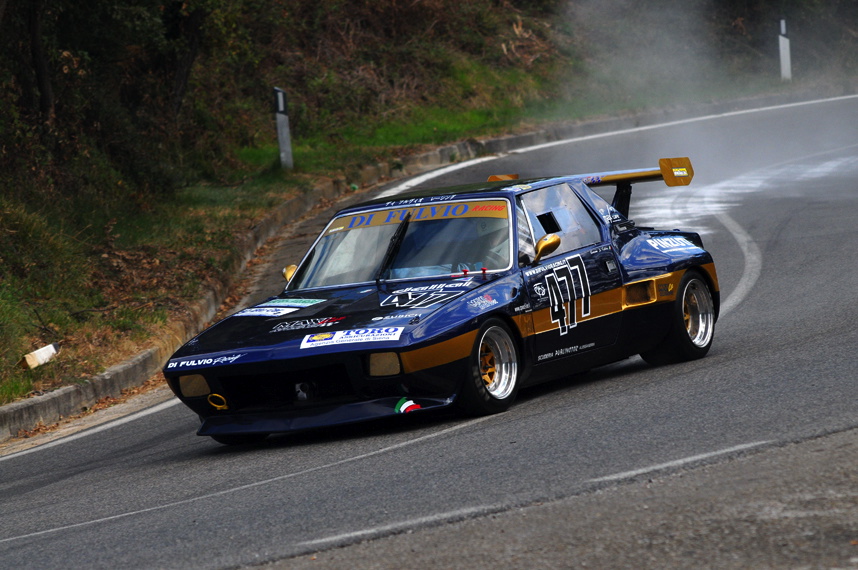 My turn…About 8 months back a local Fiat owner posted he was selling his black Dallara bodied 74. I had seen the car at a C&C event once or twice, but honestly never got to inspect it a ton until the day I bought it. At first glance, a lot of good and bad going on. The good was the body work and the PBS built stroke 1300 with dual Weber carbs. The bad, just the typical stock x 1/9 gremlins, mainly the electrical ones.

With the exception of the PBS engine, there wasn’t a lot of performance in this car. Other words, the look was all the fun but that’s all. The first thing I did was swap out the front stock brakes with a Wilwood vented performance set and struts all around.

Now you might think the Wilwood’s are overkill, especially because the PBS engine at best might put 125hp at the engine. Well that wouldn’t make much sense to me as well. At least not until I have the k24/k20 performance engine installed!

Got the PBS engine out fairly quickly. Removing a carb’d engine is pretty straight forward and since I am not re-using a lot of the engine harness, I didn’t have to take a lot of care preserving nasty old wiring. However, the engine bay was essentially internally wrapped with a tar based sound proofing wrap, I guess was doubling as heat shield? I wasn’t sure. I just know that it was a nasty and messy as hell to remove. Lots of heat (heat gun) and brake cleaner (isn’t brake cleaner amazing???) 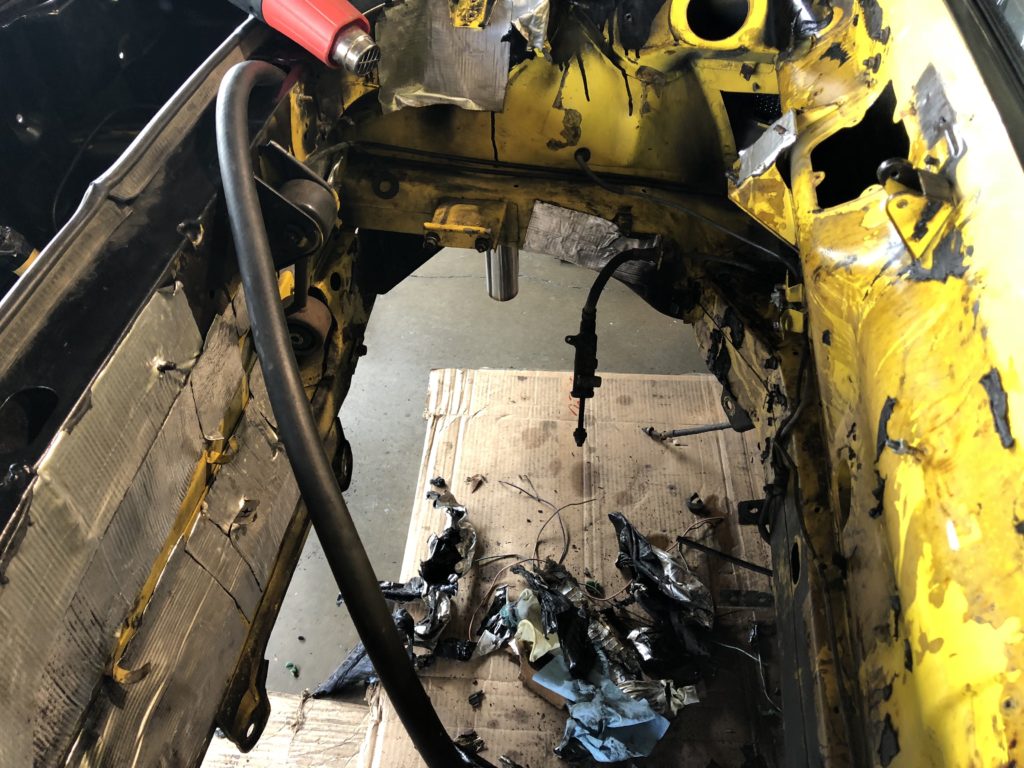 Left a nasty pile behind…

Here is a great side-by-side of a k-series and the 1300 SOHC engine. Hard to believe the K20 comes close to fitting in that little engine bay. Well, minus a few pulleys. 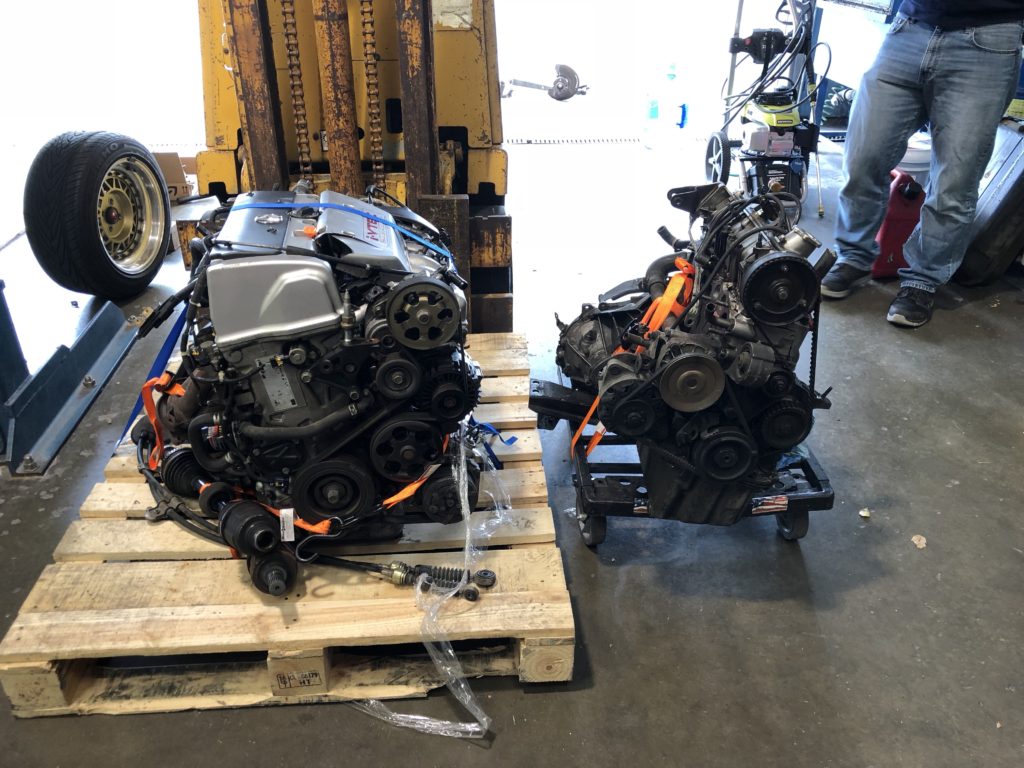 The engine bay cuts were pretty quick and I only made one with the engine the car. I remember my first swap, I think I fitted the engine at least 3 times before I was done making room. Took an entire weekend. This time, all and all about 2 1/2 hours. 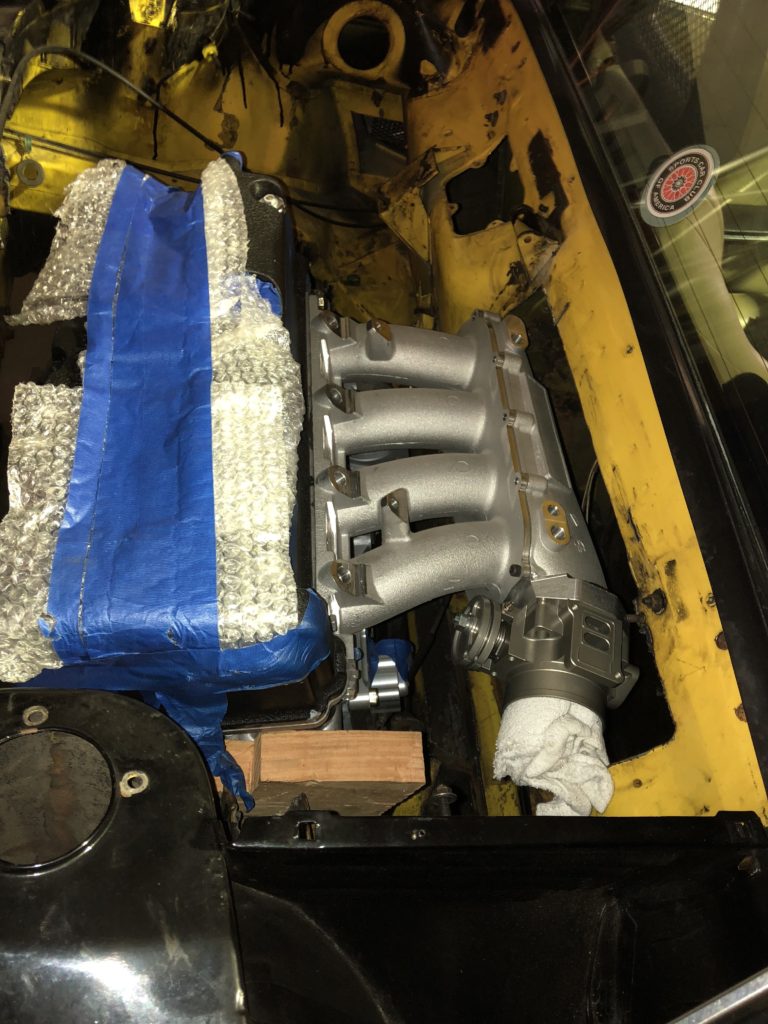 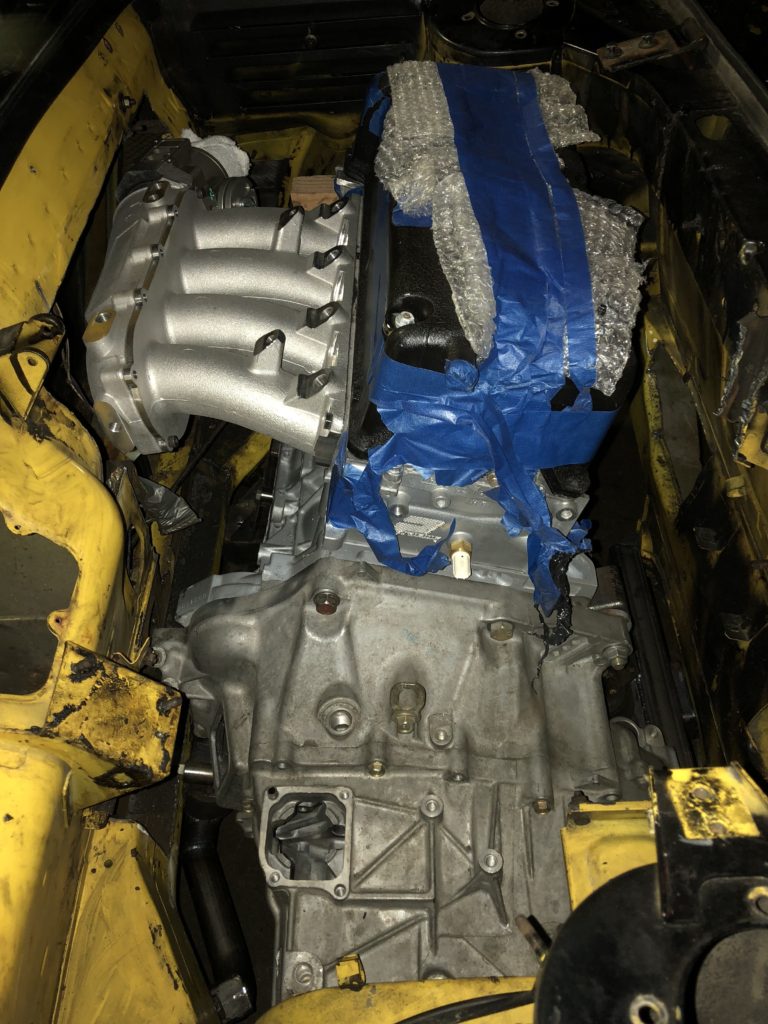 Since the TB points to the passenger side, I am left with more room to groove on the drivers side. I decided then that I could leave more of the brackets in place and re-use them. The bracket on the fuel tank firewall would be a great spot for fuel pressure regular (for example) and with a modification, I can re-use the SS stock coolant overflow and it’s brackets (off the strut tower).

With the engine out, we could next weld up the engine bay and get it ready for final fit. 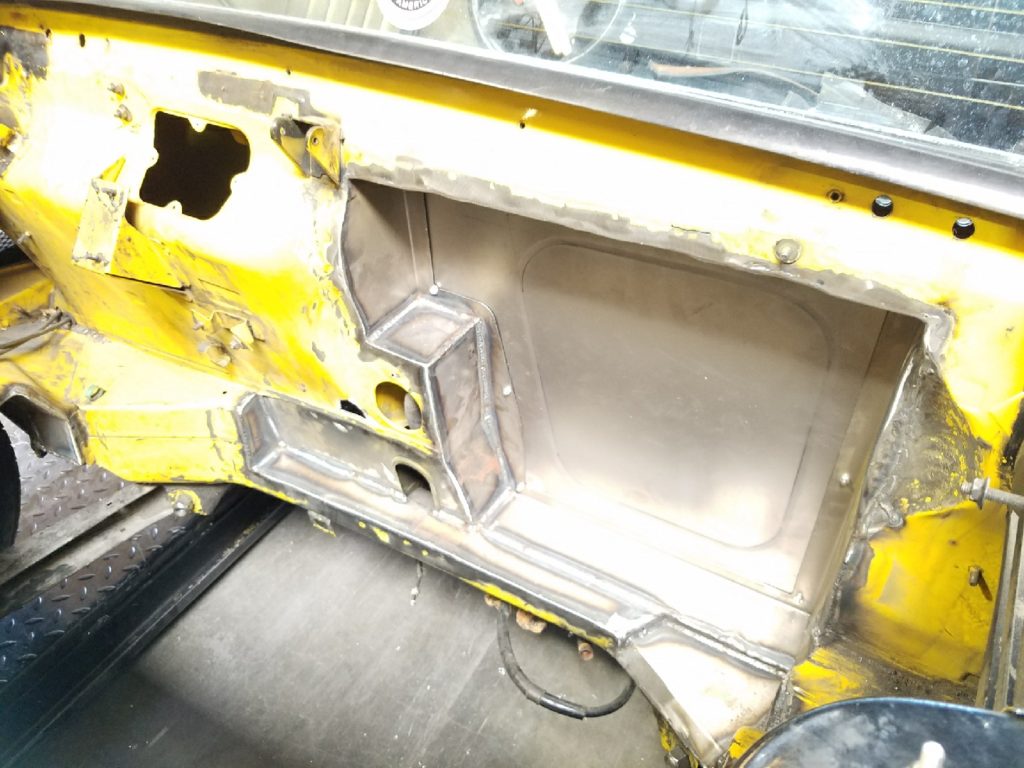 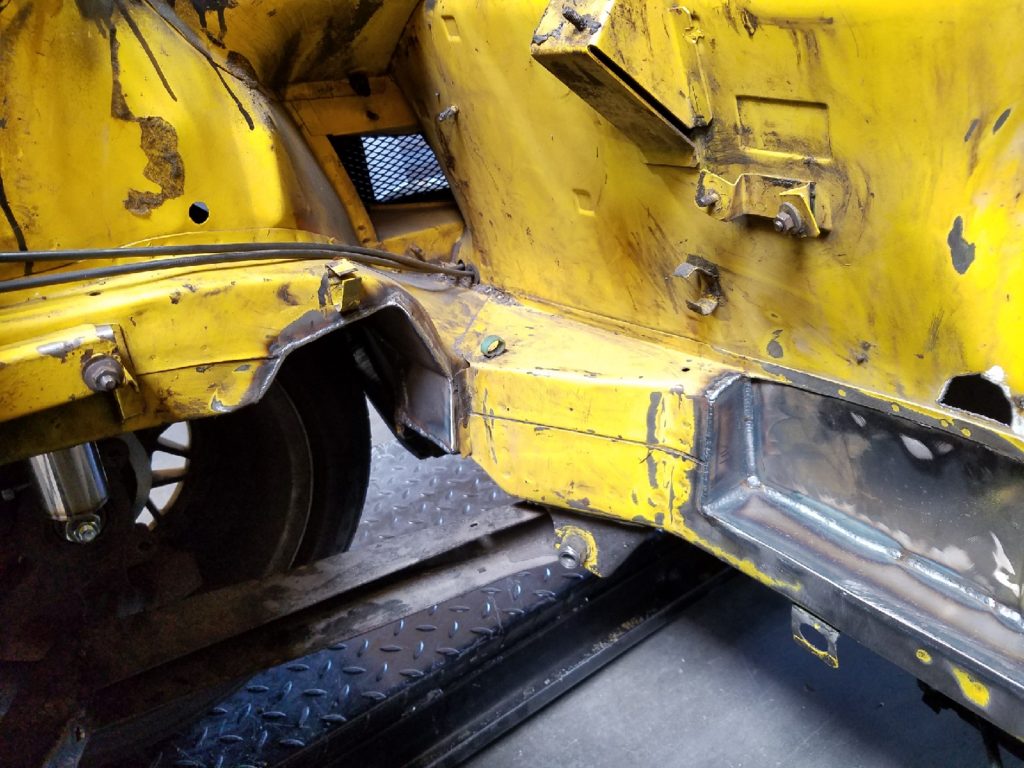 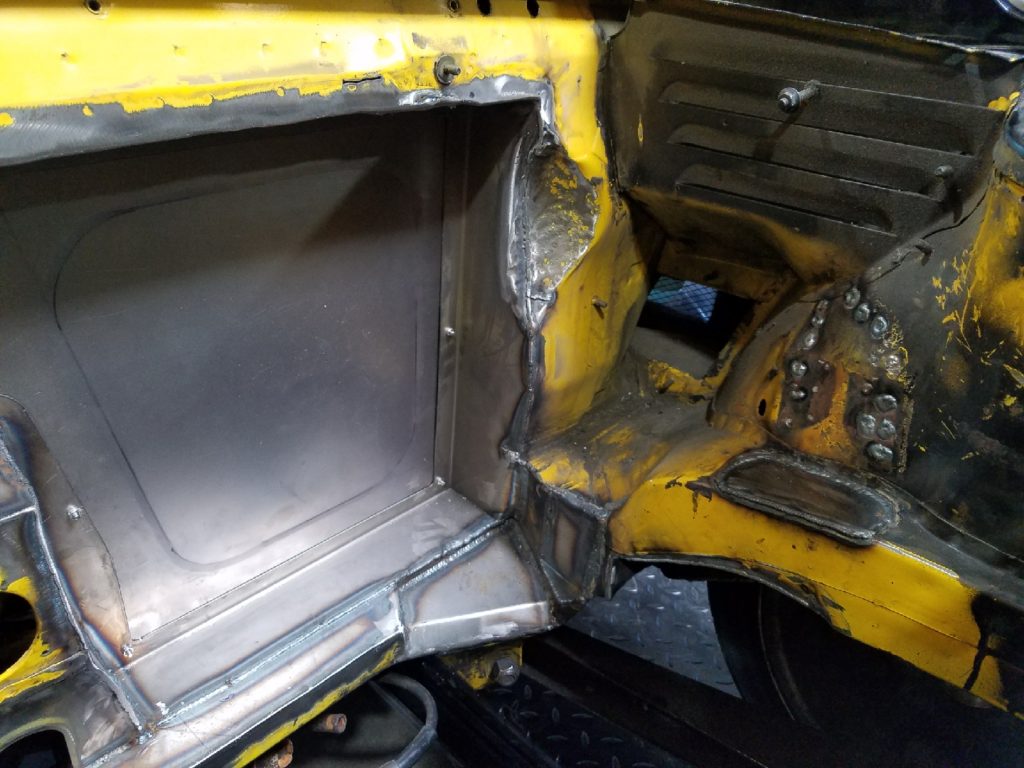 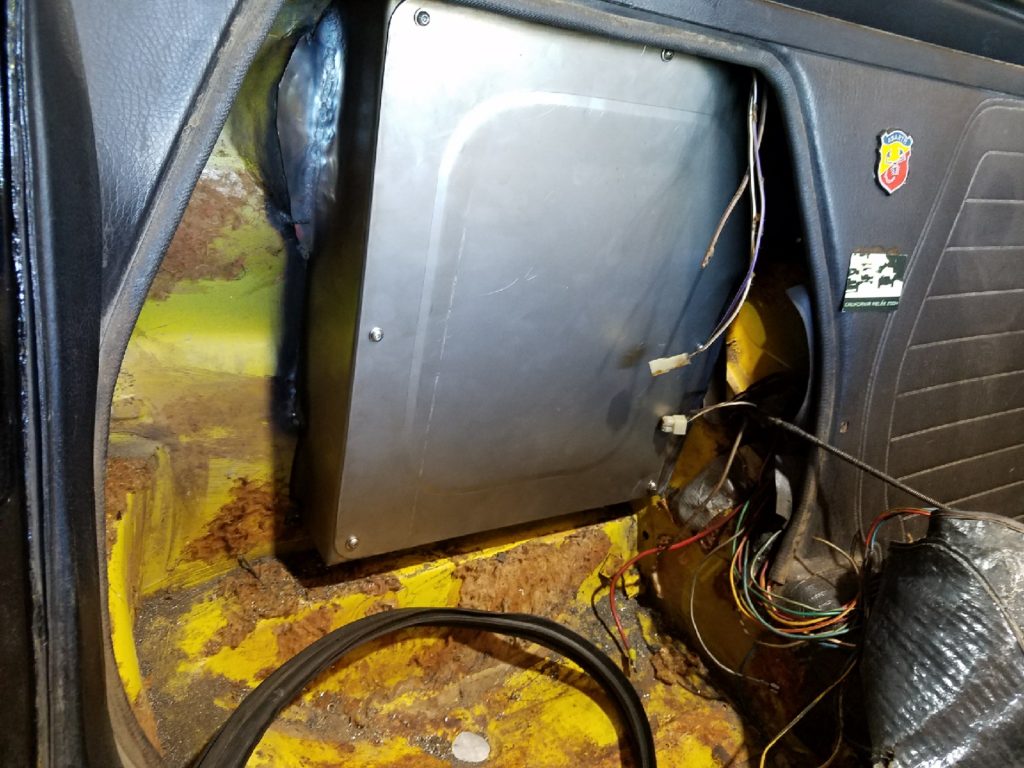 Tons of things to tackle next. One of which being the custom exhaust header. It’s a variation of a k-tuned 4-2-1 similar to this pic. 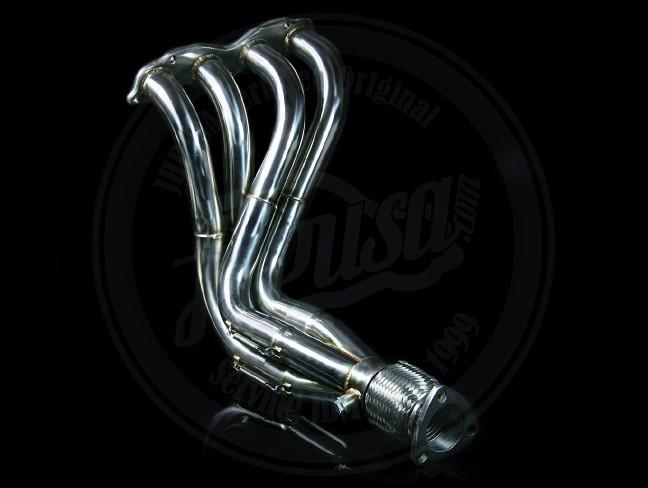 I was able to knock out a fair amount of stuff since the last fitting of the engine. Also the car went from the shop in Cameron Park to a storage and shop in SF Area. I was able to clean up the engine bay, install the engine and begin to plumb the coolant and fuel lines.

I made some adjustments to the wiring harness and added about 24 inches to the IAT, MAP and TPS connectors. I needed to make this adjustment since the TB now points in the opposite direction. 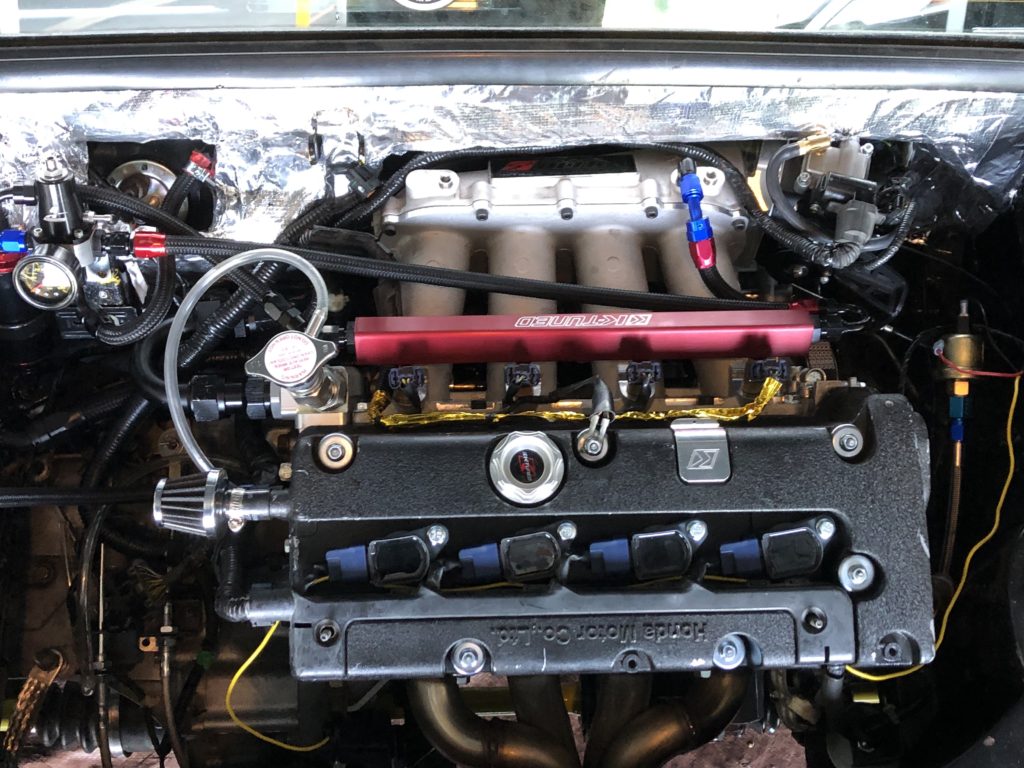 With the engine in, I turned my attention to the shifter linkage, cables and various connectors. Prior swaps, I customized the shifter/linkage actuators to use the cables which come with the kit from Midwest-Bayless. However, I never felt those fittings and the setup were vary stable. Instead, I went with much larger heim joint that fit the stock location and connector: 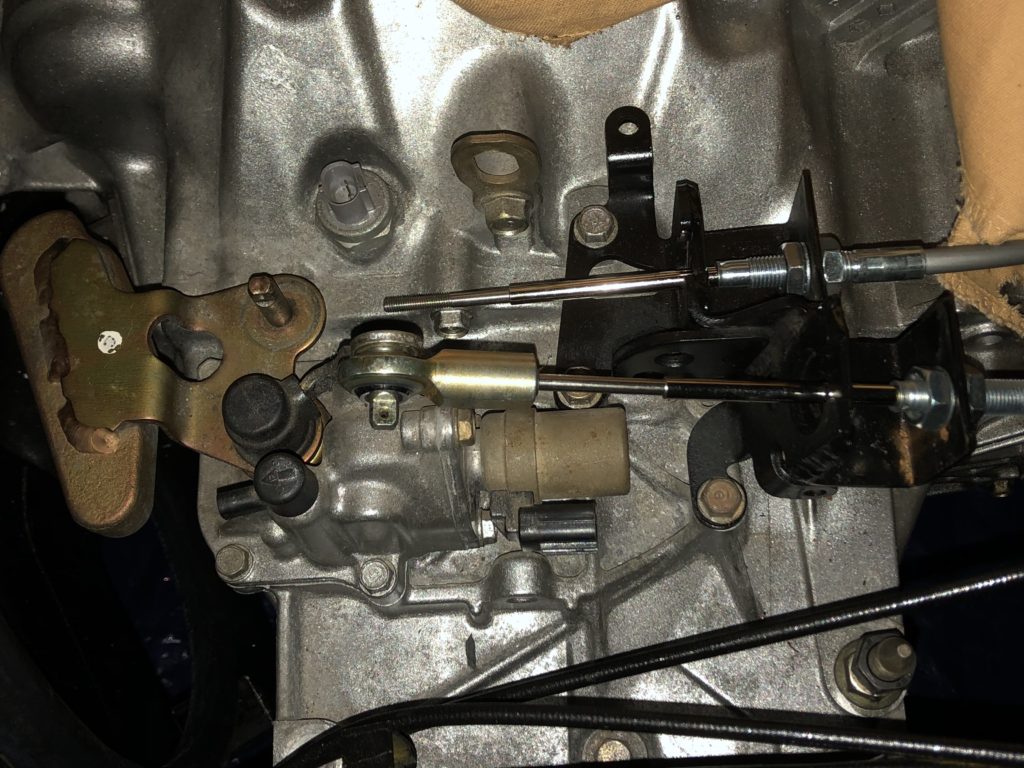 The shifter mechanism in the cabin was also installed: 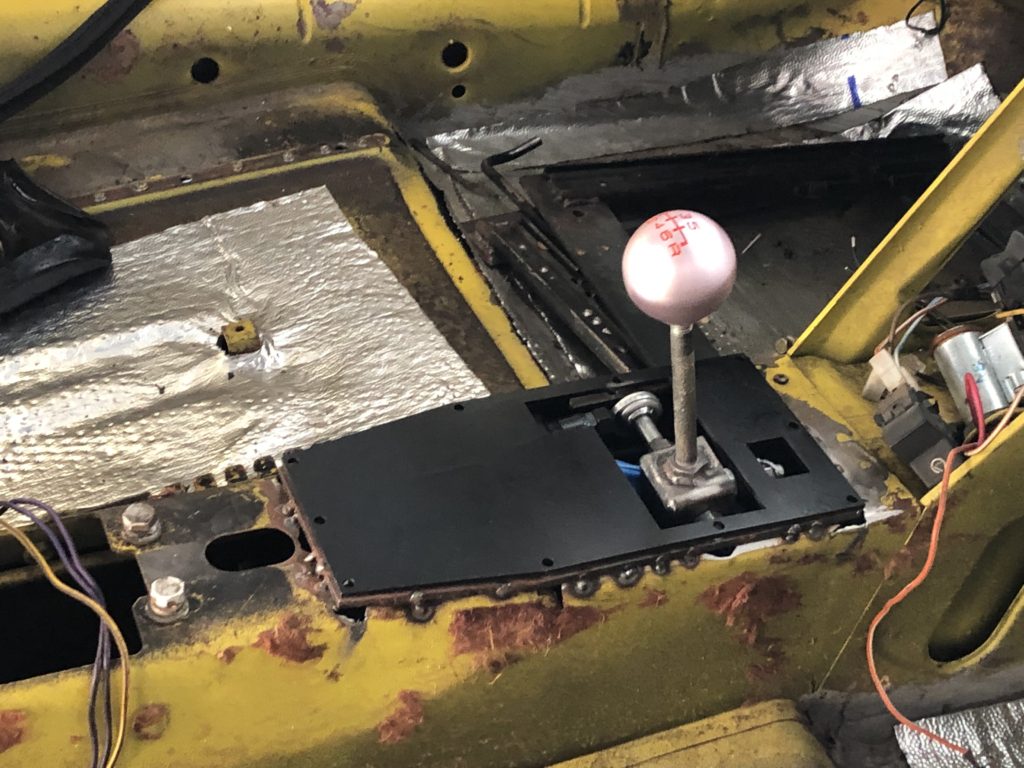 Shifter and trans appear to work well and with a small amount of configuration, I was able to find the perfect shifting pattern.

Here is a quick walk around the engine bay and inside the engine panel in the cabin. 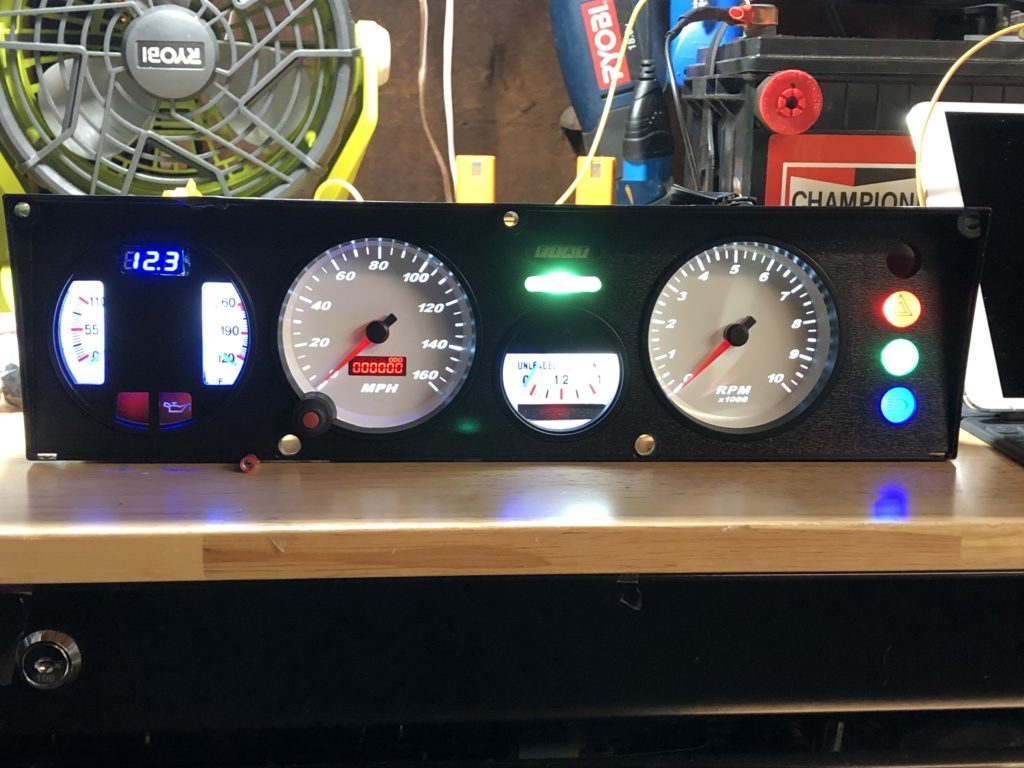 The k-series swap requires that you use digital gauges for at least the speedometer and tachometer. The last k20 swap I did, I enlisted the help of long time Fiat enthusiast and electrical guru Bob Brown, a member of the Xwebforums.com site. Bob did a fantastic job and had his schedule allowed, I would have had him do this project too. So I decided to take the job on myself. I also wanted to go with white gauges since the Dallara had custom white gauges when I got it, I thought it might be a easy job to just get the 2 I needed (Speedo, Tach) and be done with it. However, after closer inspection, the stock gauges customized to white really weren’t that great of quality and the faces were in fact fading pretty bad, turning yellow, etc., However I was already sold on the idea, so I decided to order the set of speedo/tach from Marshal Gauges in white (their last set that had plain script on the dial faces – yes!). I also have a friend who runs a online store that does custom dial faces for all kinds of classic/modern classic gauges, including Fiats so I had them create me a set for all of the gauges. They had an existing print for later dial kit that didn’t have oil pressure gauge so I they made a custom one for me: 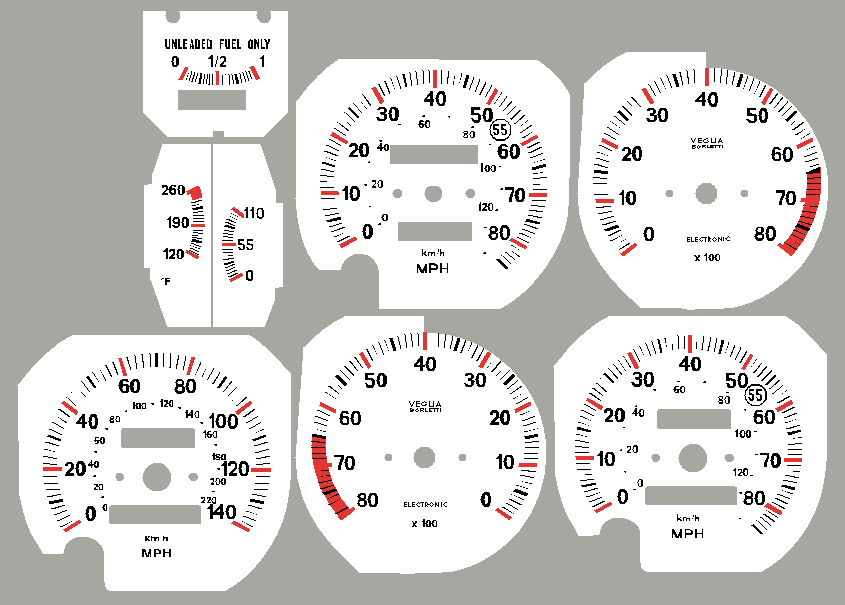 I really only needed the fuel, water temp and oil pressure dial faces.
I dissembled the stock cluster and remove each dial/gauge. I then removed the electrical circuit board and was left with this:

The problem now of course was the new speedo and tach will not simply drop right in and some major customization was in order. My plan was to try and save as much of the circuit board as I could, but that soon turned out to be harder than I thought.

Using a small grinder/cutting wheel, I cut the board and the back of the cluster to make room for the speedo & tach. Once I had enough material removed, I fit the gauges, secured them to the white plate of the cluster and I then began to solder together the sections of the circuit board. 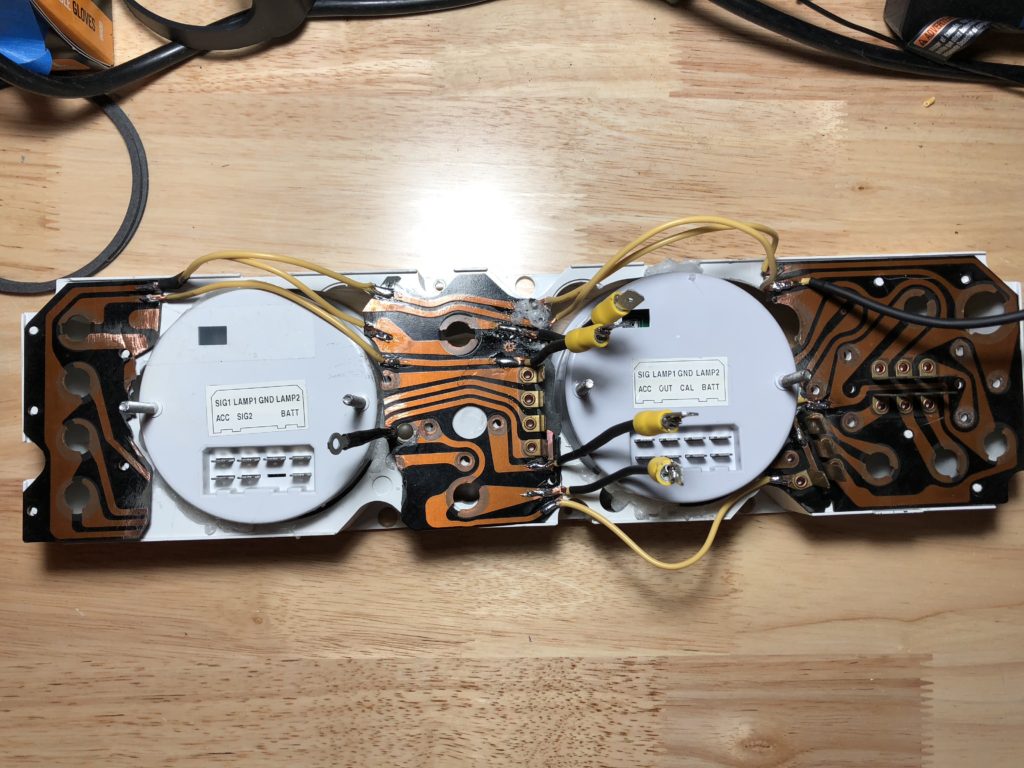 Some of the pin-outs had to be modified or completely removed, so in the cases where I wanted to preserve that wiring, I simply solder a wire to that part of the board with a male connector on the other end. Pretty much did this for all of connectors.
Below is a complete pin-out diagram of the X19 circuit board (any year). Thanks to Bob Brown @ xWeb. 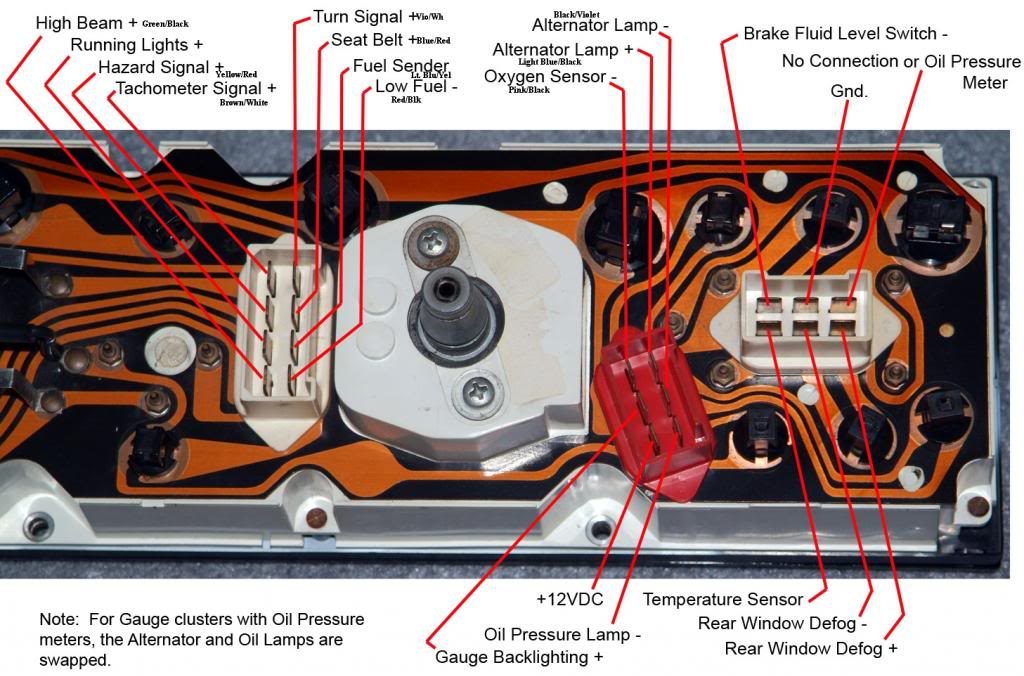 Using the above diagram along with an unmolested board, I was able to piece together the wiring I needed to reconnect. The Tach 12+ connector and the backlighting bulbs for both gauges are eliminated. 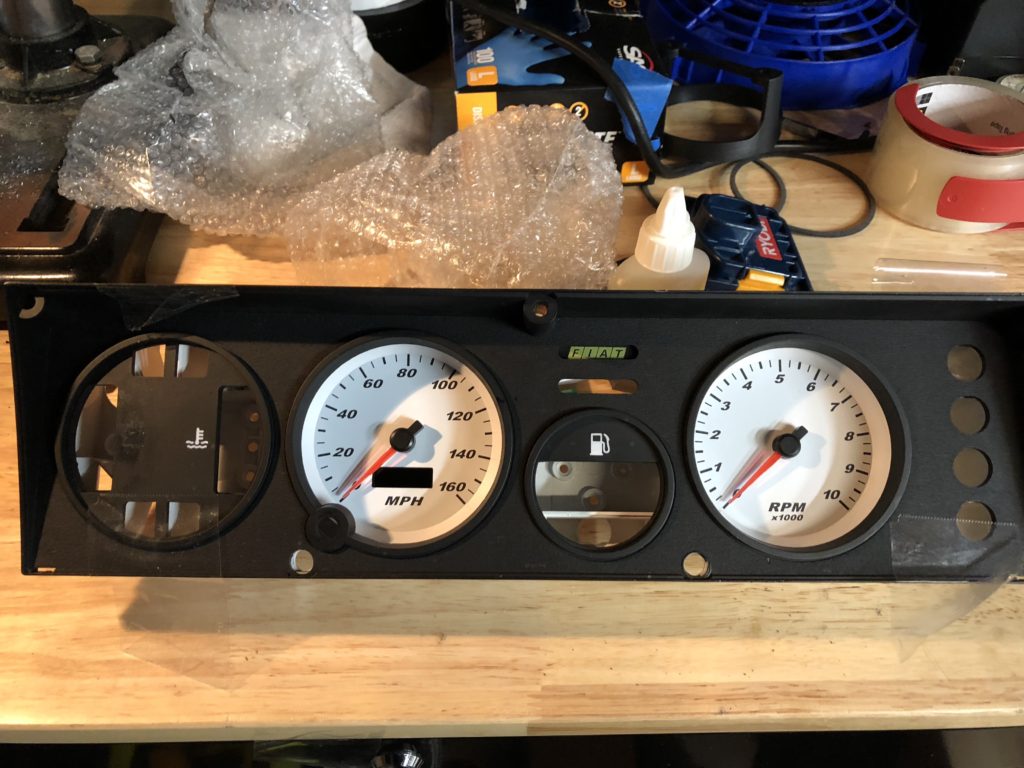 With the gauges fit, I then moved onto adding the white face dials and rewiring the lights with LEDs. Since adding the tach and speedo meant eliminating their back lighting, it was going to severely lower the illumination  of the other gauges, so I added a pair of LEDs that sit between the oil and temp gauges as well as above the fuel gauge. I tried a number of colors, but ultimately went with a combination of 1 bright white and 1 blue each. This gives just the right hue, doesn’t strain the eyes and looks great both day or night/dark exterior lighting.
With the oil gauge, I then lose a voltage gauge so I decided to add a small LED digital readout. 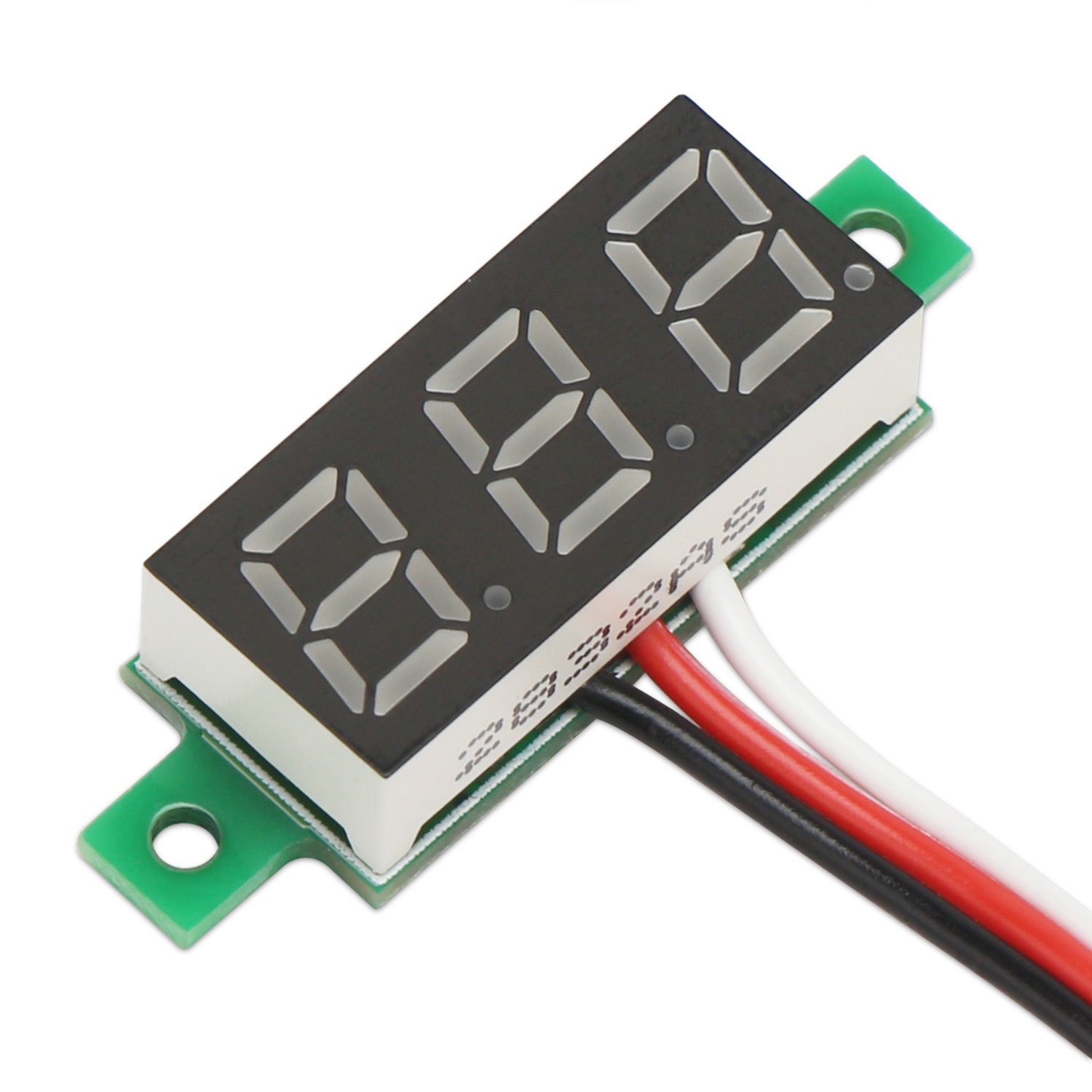 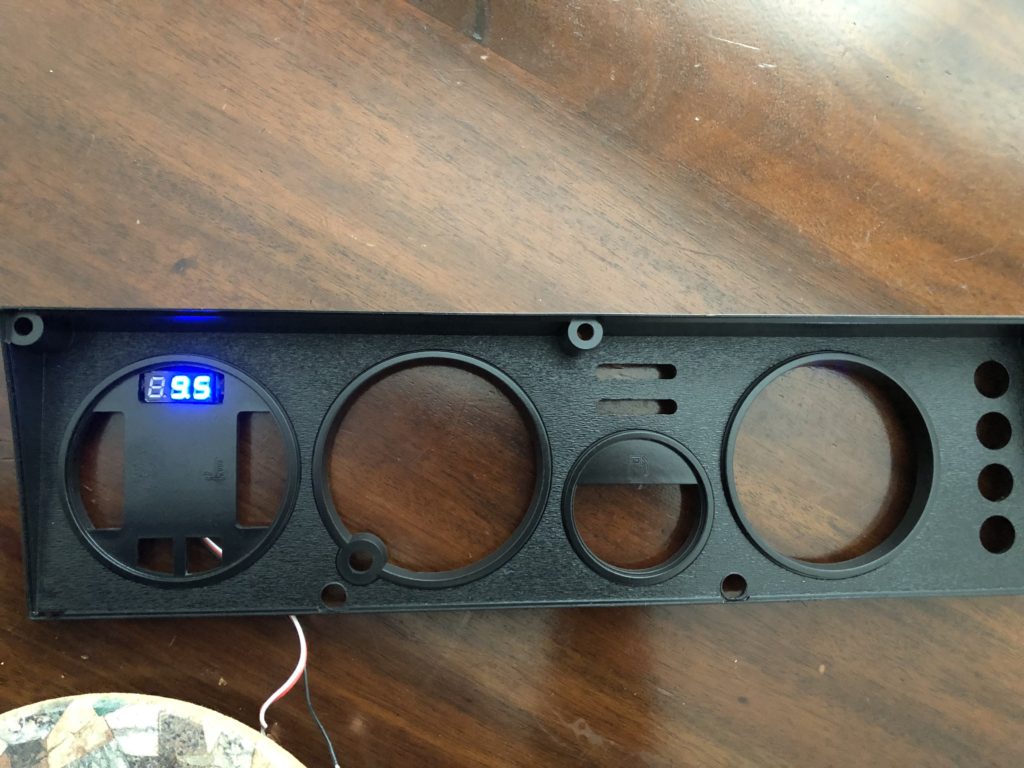 The upper 2 dummy lights on the stock cluster consisted of a break check light and a blank.  I opted to remove both, small cut/grind and I could fit the digi volt display. 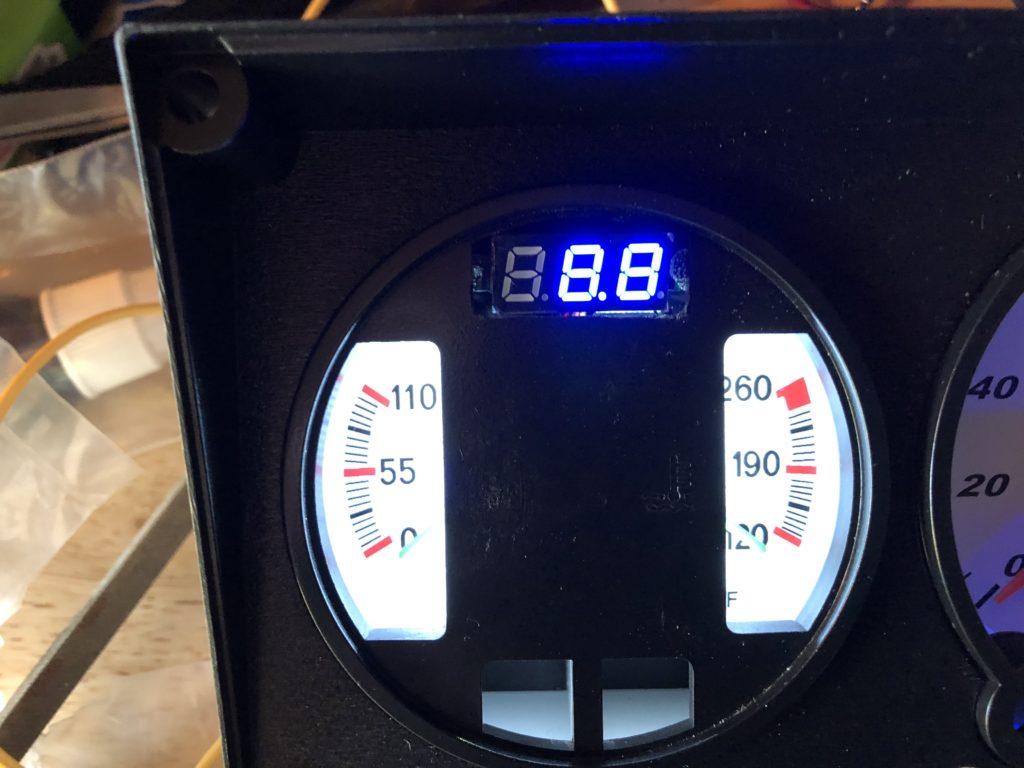 I like the look. I had a choice of blue, green, yellow or red. I opted for the blue, but the green was a close second. I could swap them, but I used glue to install so not an easy change. I would recommend to use small screws next time (which I will).
For the stock cluster lights there are many options. The “74” size fixture is pretty common and if you like bright white, then you will like these on amazon 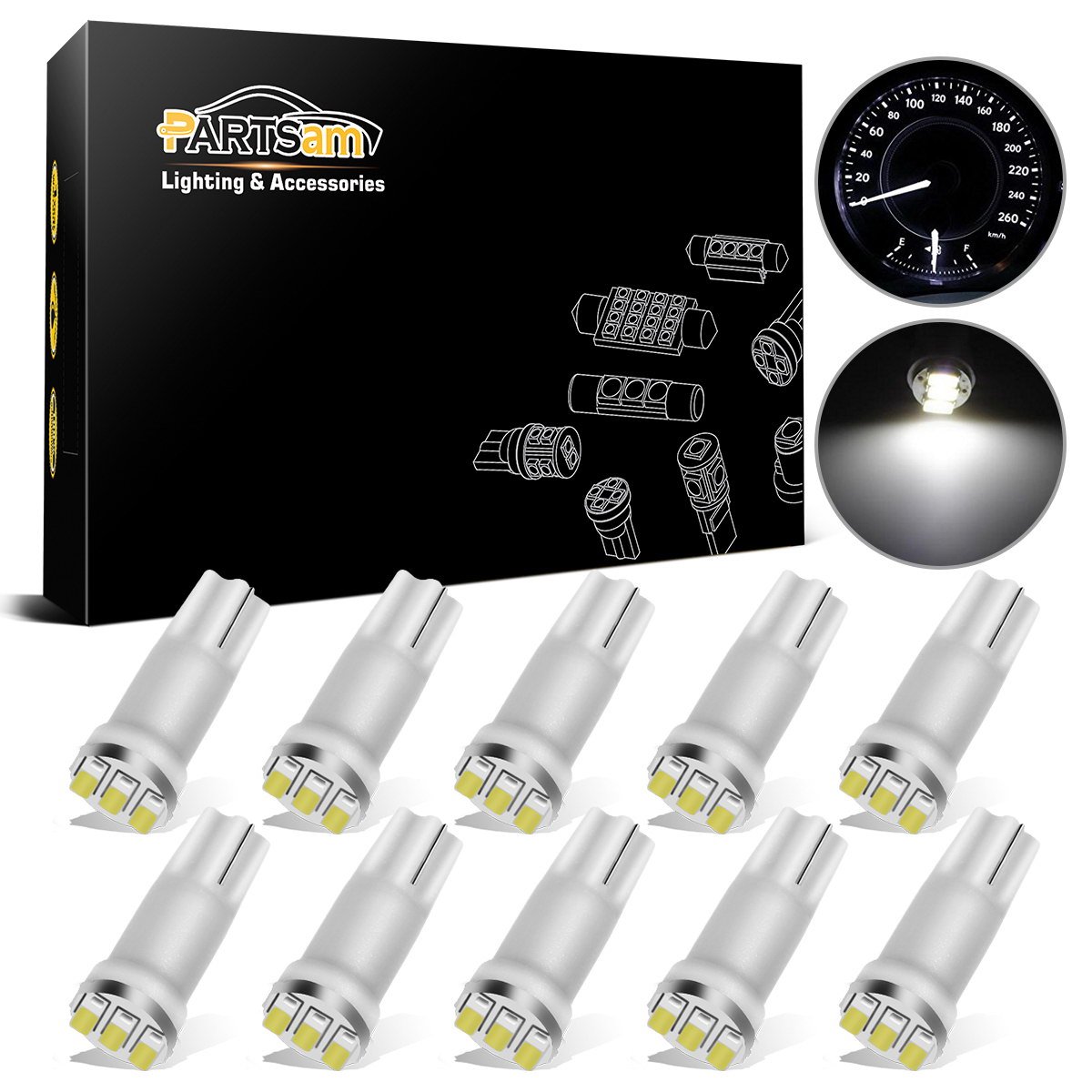 These will fit the small fixtures, like the ones behind the 4 indicators on the far right. For the larger “backlighting” bulbs, you can use “194” size. Also abundant online however, I used these I found at a local parts store near me. Brand is “Pilot” and there are a number of optional colors from bright white, soft white to amber and red or blue in my case. 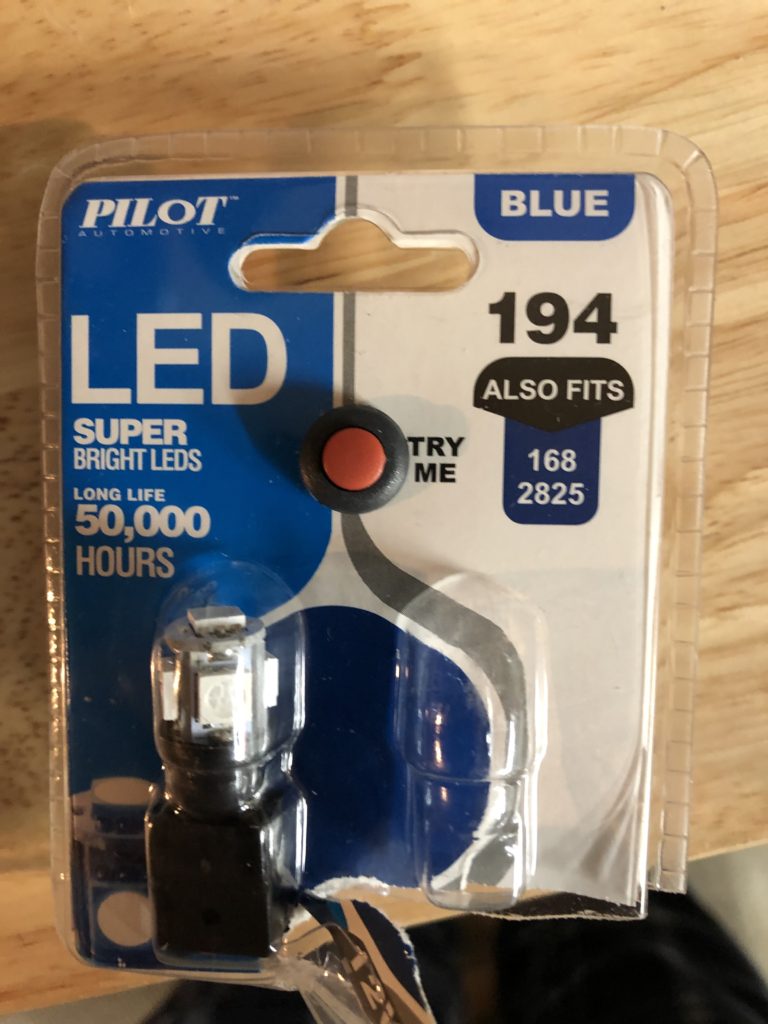 I ended up using just 4 LEDs total to light the dial faces of the gauges, 2 white and 2 blue and repositioned them to best light the oil pressure, engine temp and fuel gauge. The speedo and tach have their own lighting sources built. I used larger 194s between oil and water, and 2 74s above the fuel gauge.

This gives the best affect of a brightly lit gauge(s) with a soft blue that eases the intensity and makes them less hard on the eyes. I tested them in both bright light (not outside) and in 100% darkness and they look great.
Here is the finished product:

I wired the tach and speedo to run the amber lights with the ignition on, and the white backing light when the cluster is turned on (night driving). Ryan Fellini @xWeb and SonOf Xweb (FB) suggested a 3rd night option where you can switch only the speedo/tach to amber at night (with all other dials off). I can do this pretty easily so I may try it. The video above is the tested current configuration that looks/works pretty well. So far, I am quite happy with this setup.