The Evolution of My x19 Engine Conversion and Options

In spring of 2013, I decided it was time to up the power and move away from dual carbs and into a more modern engine/FI setup. Many options out there, one of which would have been to convert to the x19 1.5 litre FI motor Which is a great option if I wanted to just plain reliability. A Bosch FI system is the stock setup for the late model Fiat X/19s and is very solid and reliable. 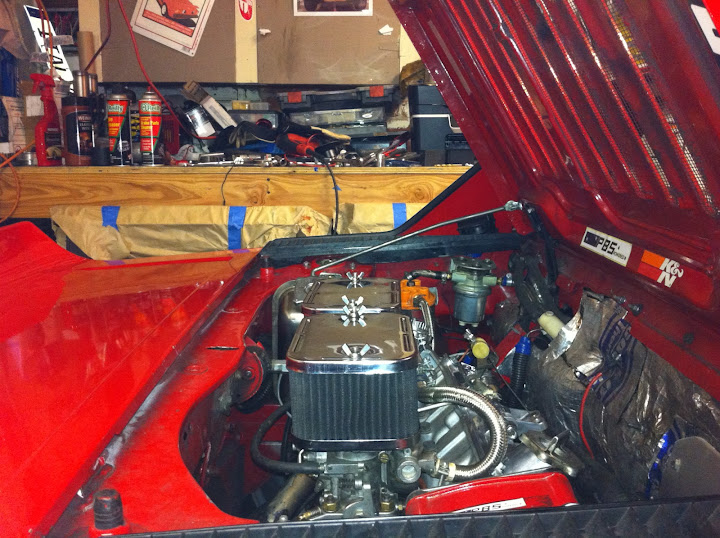 Stroker kits that could take the displacement up to 1.9 are out there. You could easily run them with a FI setup as well by introducing a programmable ECU system like a Megasquirt. This is NOT an easy job and likely about 95% of the work would end up getting farmed out to a pro to do the engine build. It is also debatable whether the engine is still reliable at this point. I think for the most part yes; it just depends on how far you want to take the engine beyond the short block and minor head work, FI intake manifold, etc.

The other possible option was to go with a Fiat/Lancia DOHC 1.8 litre engine out of a Lancia Scorpion (could use a Beta for some of the bits but a Scorpion would have an almost complete setup). I have seen a few of these conversions, one of which was a phenomenal “Abarth Tribute” car restored and converted by Italian and classic car enthusiast Tom Mulhall. An incredible car with TONS of power and torque. He ran dual DCOEs on this highly modified 1.8 litre including performance cams, light flywheel and a few other bits. I don’t remember the official dyno results, but my butt-dyno registered some serious power. Great setup, but it was costly and with the dual Weber carbs, could be a little finicky. Converting to FI is definitely an option for this engine as well, but this would require a megasquirt or similar programmable ECU to get the most out of the engine. There are a few other options out there as well, but I am not familiar enough with them to give a good idea of the pros/cons for them all. At the end of the day, I decided to go with a Honda K20 DOHC VTEC engine. The decision on this was based on a number of things. One being my first hand experience with a converted X19 track-car I was lucky to see and drive (around the block) back in 2010, the large number of other “swaps” many people have done with this engine, including many Lotus Elise or Exige conversions. The amount of online info for doing swaps with this engine and drivetrain seem endless. Add to that the programmable ECU(s) readily available, including the most popular by Hondata, the K-Pro. But the final reason was the fact that a very reputable Fiat mechanic and guru had started doing in-house conversions himself. Matt Brannon and team at Midwest-Bayless in Columbus OH, had done their first conversion I believe in 2009/2010 (confirm and edit later) and by 2012 had a conversion kits available on their storefront. It didn’t take long for me to decide to go for it. 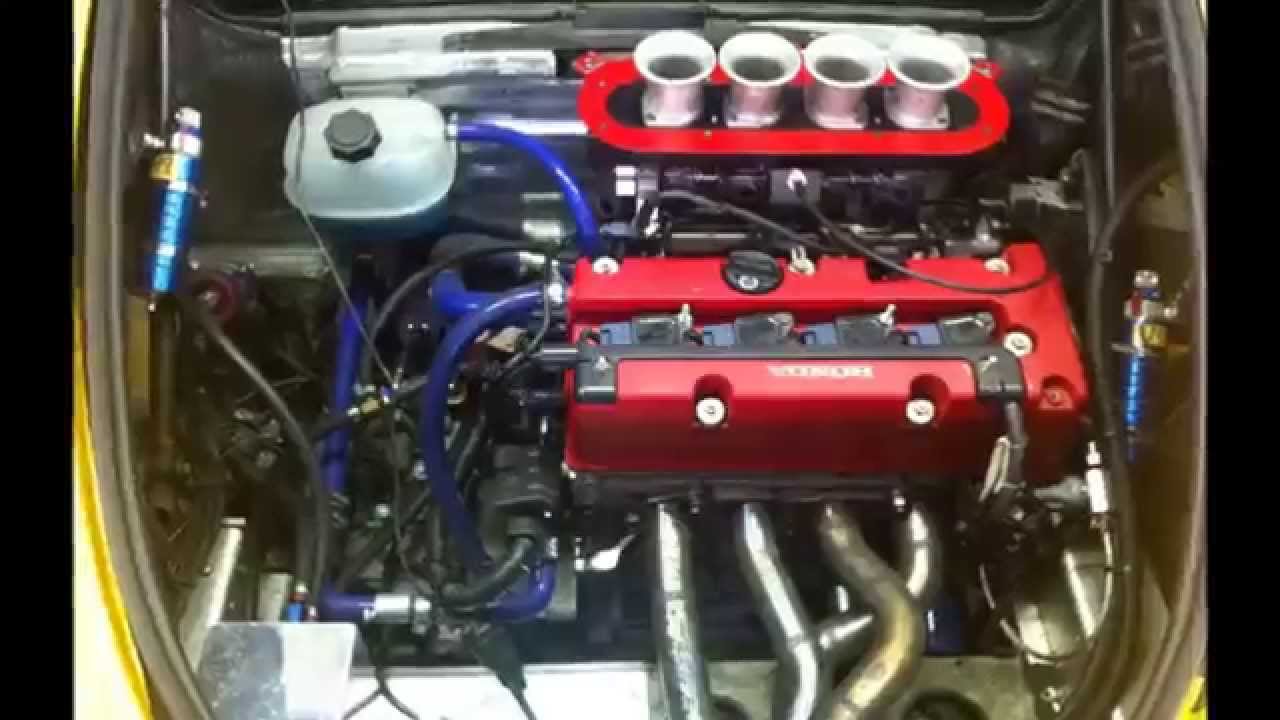 Started the project off by sourcing an engine/trani and all the bits to go with it. After searching (craiglist for the most part), I found a k20a2 with transaxle, and all the ancillary bits. Only item I didn’t have was a full engine side wiring harness. The seller claimed 45k on the engine, I could only take his word on it as the engine was already out of the totaled car. The rest of the main parts included a matching ECU (PRB in my case), an override unit (from k-tune) to get around stock ECU immobilizer. Lastly and most importantly was the swap kit itself. The kit includes a number of critical components, most importantly the engine “cradle” or sub-frame that attaches 3 of the engine mounts to the engine and to the car. Other important parts being a custom shifter and shifter cables as well as the axle rods splined to fit the Honda inner CV joints and outer Fiat X19 CVs. 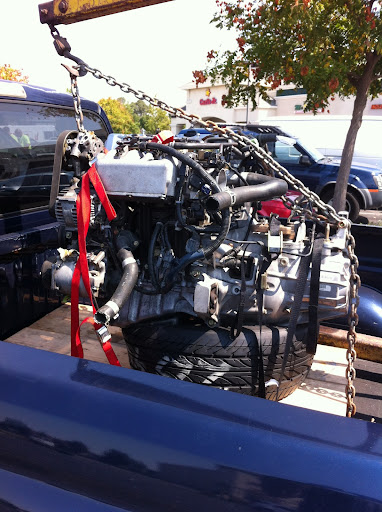 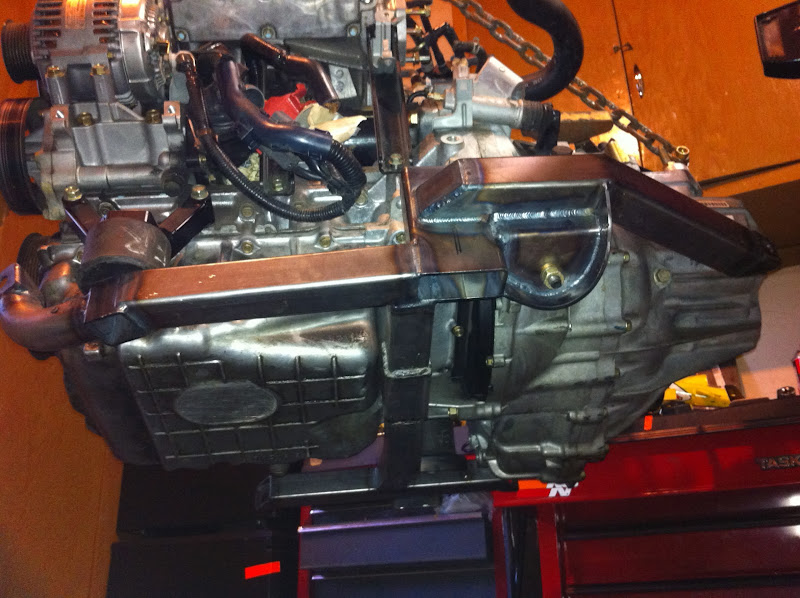 So – Now it’s time to start this thing. Like any project, it is all about planning and creating realistic goals and milestones. I planned on doing as much of the work myself as I possibly could. Hindsight, this wasn’t the best plan but in the end it worked out. The First thing was making room for the larger K20 engine. The basic layout would be the same as the stock engine; pulley side faces passenger end of the car. However to get the axles to line up fairly straight with the wheels, the intake side of the engine needed more room than there was in the engine bay. The solution was to open up the firewall behind the passenger seat. This was would allow better access to the engine for the install and service of the coolant lines, alternator, engine harness, starter and a number of other parts of the engine. The good news is since the spare wheel normally sits in a wheel well behind the passenger seat, boxing an opening was very doable. 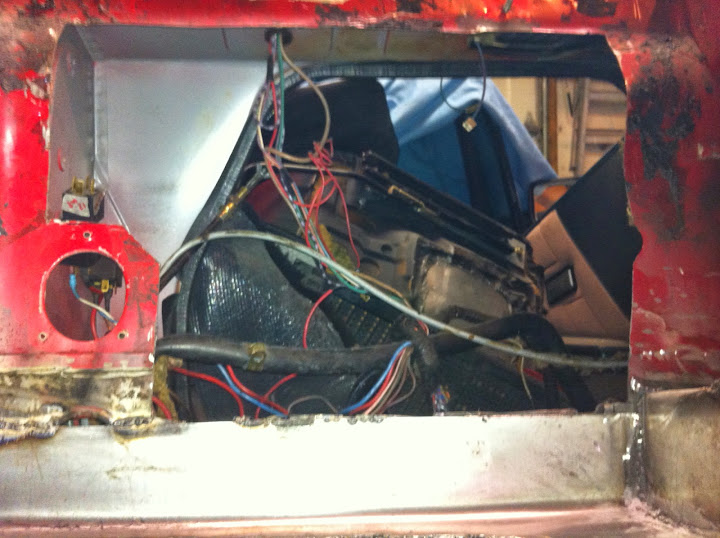 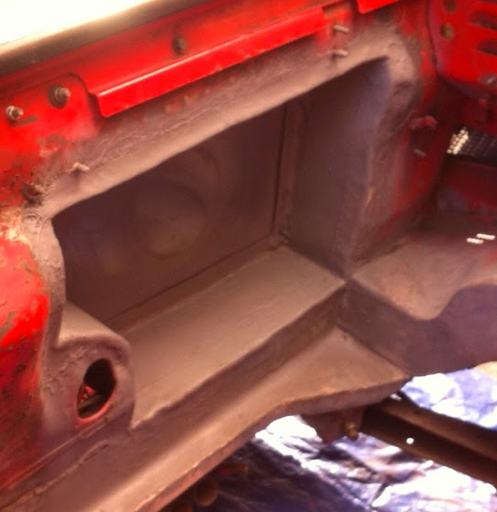 The remainder of engine bay modifications were mainly making room in a couple of spots for the new engine. this meant cutting out and replacing metal and adding gussets, and welding it all back together. 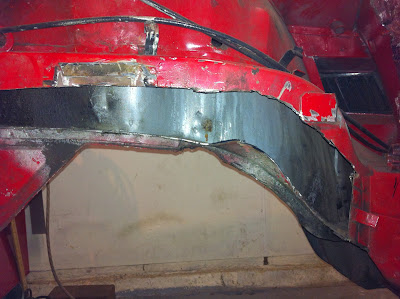 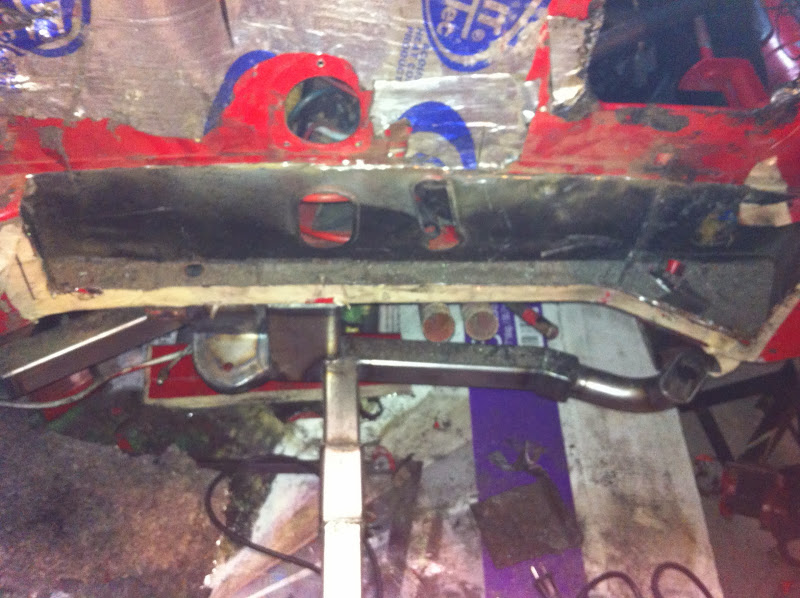 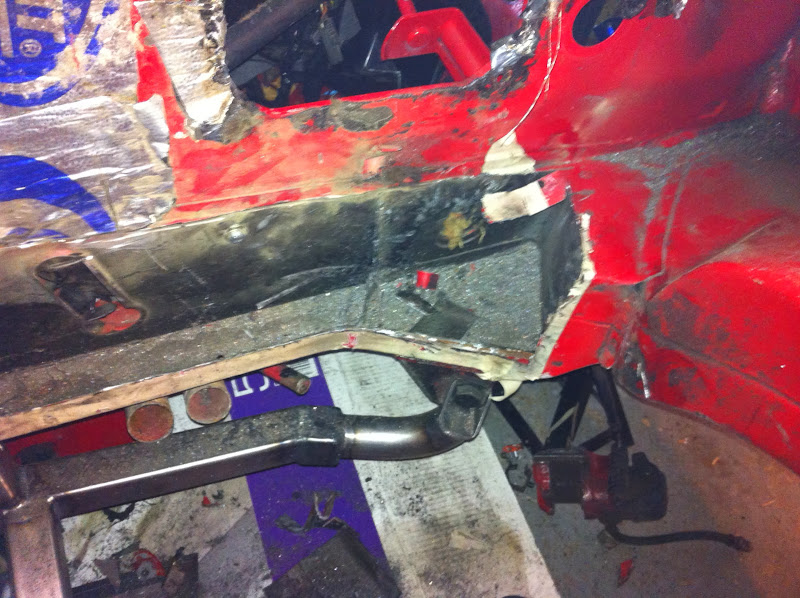 Before I could weld the larger bits of metal back in, I needed to test fit and retest fit the engine a few times to make sure it fit properly. A few tries and more metal removed and the engine fits! 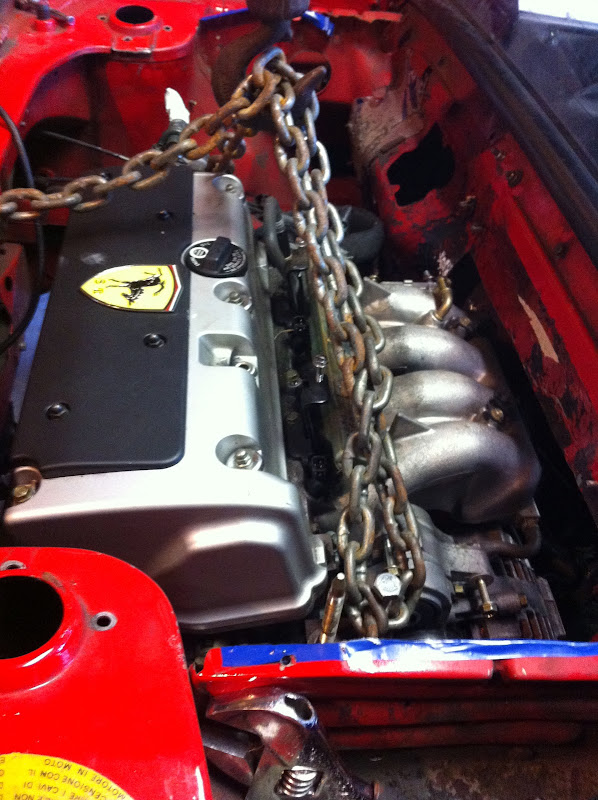 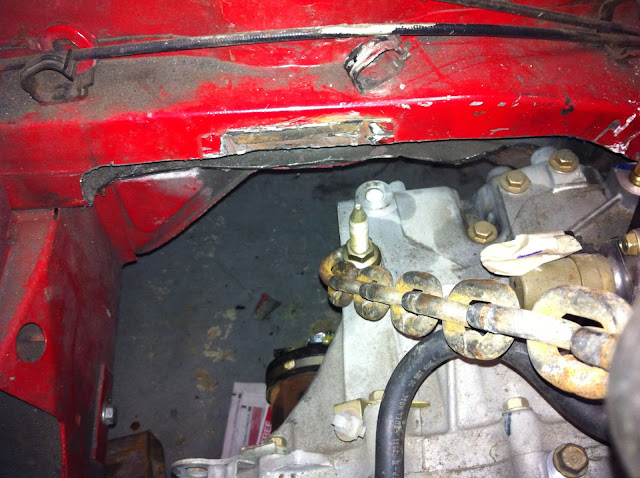 Once I had the engine completely in and I was confident the fitment was sound, I could start to put back what metal I took out with replacement bits I created. Once I had the templates worked out… 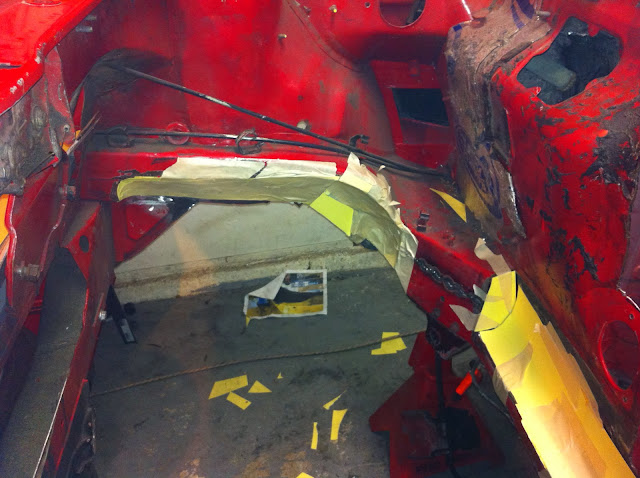 Then welding in the replacement metal… 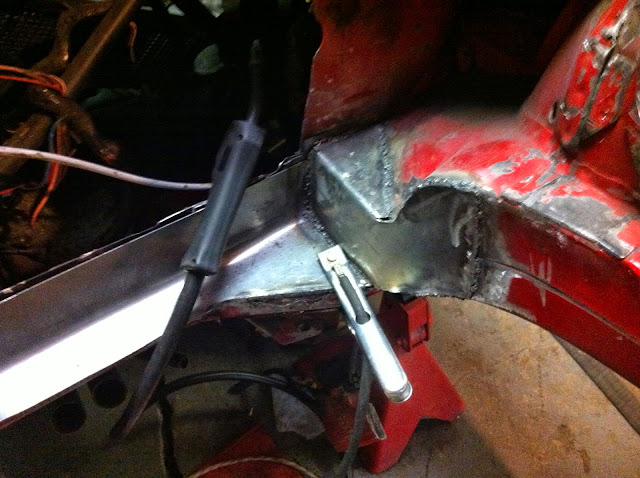 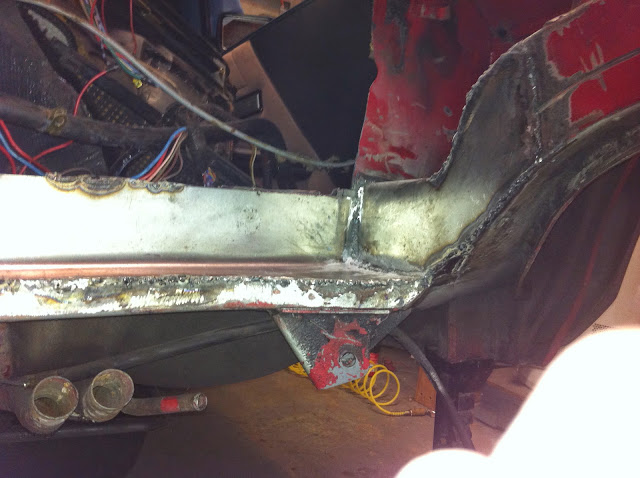 I had planned to bring the car to a shop for the welding but my budget was getting blown. At this point between the engine and custom conversion kit, I was in the hole now about 6k. My goal was to keep this under $8k.  So I did all the metal work myself. I added gussets inside the new frame rail(s) for added rigidity and strength. Probably about 3-5 pounds of metal. None of visible once done as it was all mainly inside the new metal added to the engine bay.

Once the metal was done, I primed prepared for port-15 sealing of the entire engine bay. 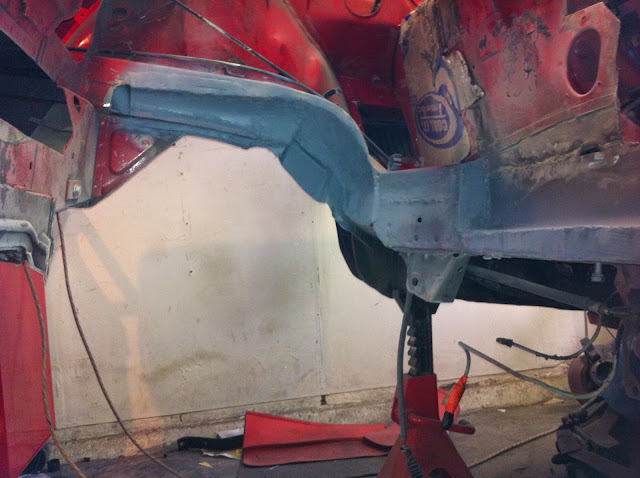 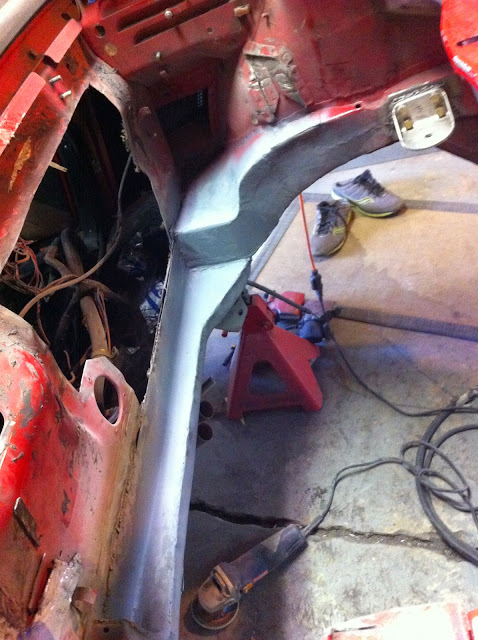 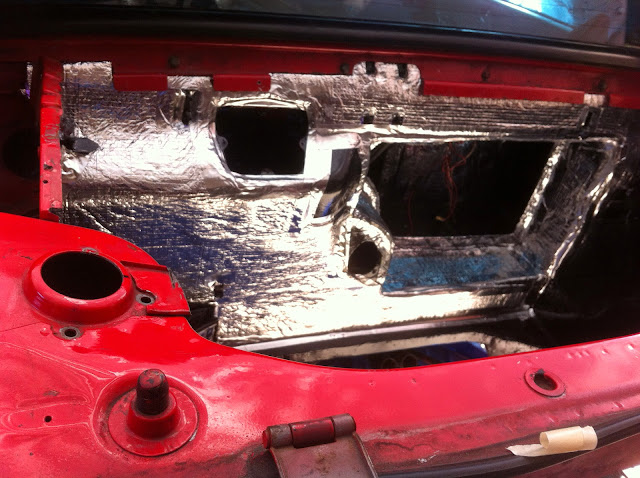 At this point, I was done with the engine bay modifications, at least for the most part. While I was doing this work, I had sent off some parts to a local powder coating shop. The custom axle rods, rear calipers (rebuilt) and the engine cradle. 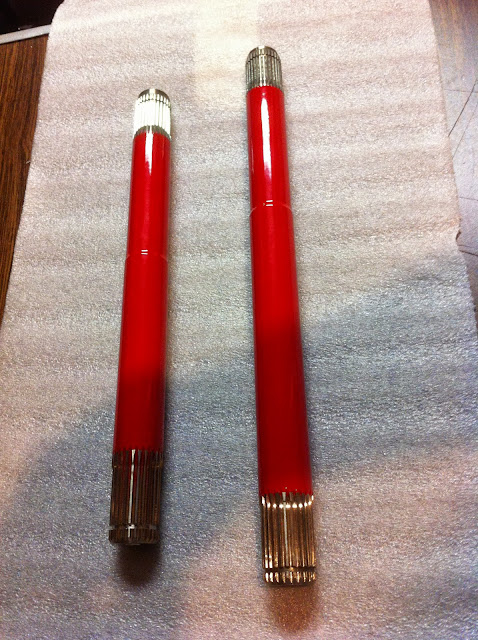 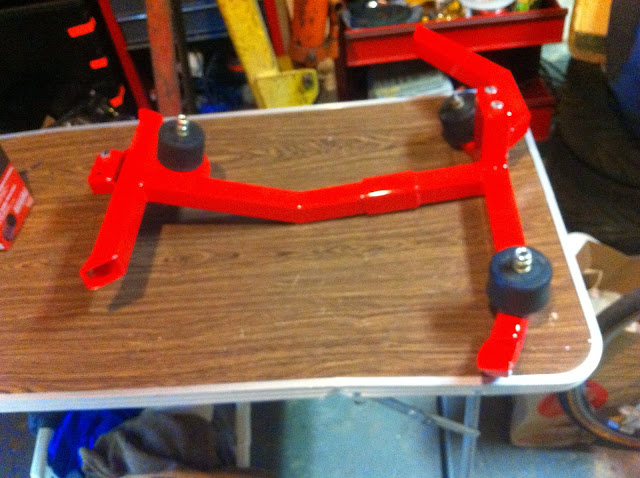 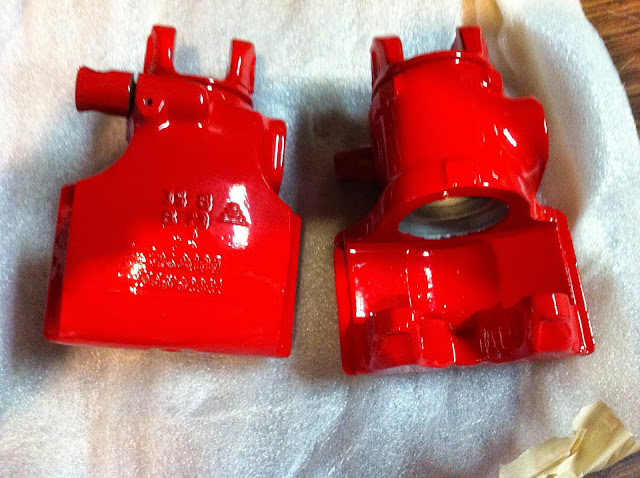 I had already done a engine-out service, renewing some seals, etc, installed the custom pulley to maintain the proper belt geometry since the power steering and AC pumps were removed. The next step was to come up with the right cooling line configuration. The stock K20 coolant lines and components weren’t going to work with conversion. The toughest one being the routing I need to take with the coolant lines and mate them with the under-car hard coolant lines. 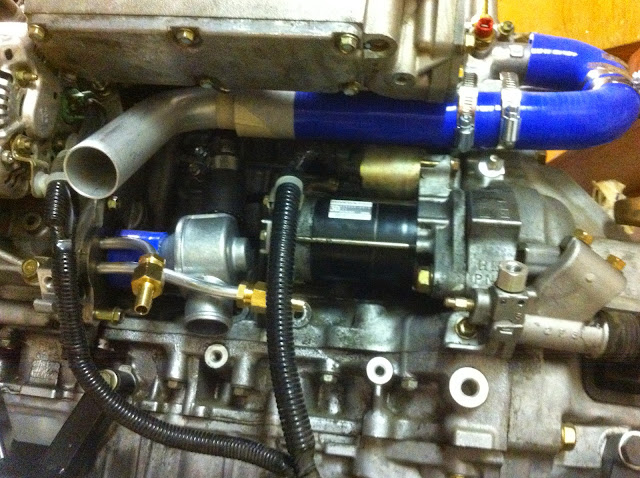 Now that the engine was in, I could begin to workout all the other bits like hydraulic clutch line and slave cylinder, throttle cable, throttle body geometry. I will cover that here.