The Engine is in. Hard Part is Done – or is it?

The engine in, I can start to build figure out where everything is going to go. I started with figuring out the wiring harness. I left the stock wiring harness hole location in the firewall to allow for both the stock wiring harness (now basically to just power the rear side and tail lights) and the engine side K20 wiring harness. While I had the engine out of the car, I connected and confirmed ALL of the connectors where they went and how they were routed. I had also done some electrical wiring fixes. See here for details. Scouring the web, I found a thread on “K20a2 Dissected”. This thread was reposted many times on many forums. I had copied to a local doc and added a few bits and clarified some others. You can see it here. Please feel free to add comments or suggest updates if you find anything incorrect or missing. I will add the complete harness in later however.

Once the engine was in and I had the rear suspension back in place, I next tackled the custom axles. My X19 uses later wheel hubs/A-arms as I had converted to a 5 speed transmission in a prior project, which means it uses the same CV joints for both inner or outer. With the conversion, you eliminate the need for using the Fiat inners, which are replaced with the Honda inboard CV joints. Good news is that I now have 2 extra CVs I can choose from. Bad news is that 2 were already bad, but it did make the choice of which to use much easier.

The kit from MWB (Midwest-Bayless) has 2 custom axle rods the proper length that are splined on each end to adapt a Fiat CV and a Honda CV on the other. 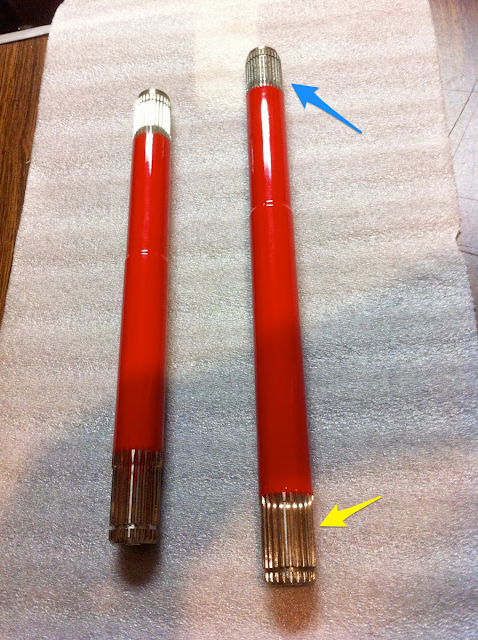 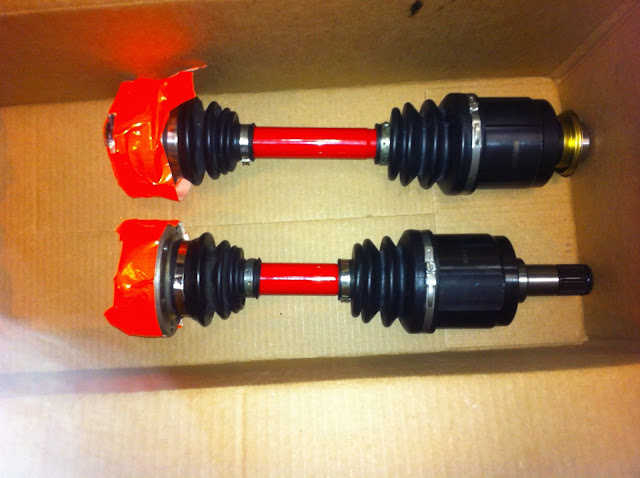 The Honda CV’s simply slide into the transaxle and use a retaining clip to keep them in. The Fiat side uses the 6 (3 pairs with special washer) allen head bolts. 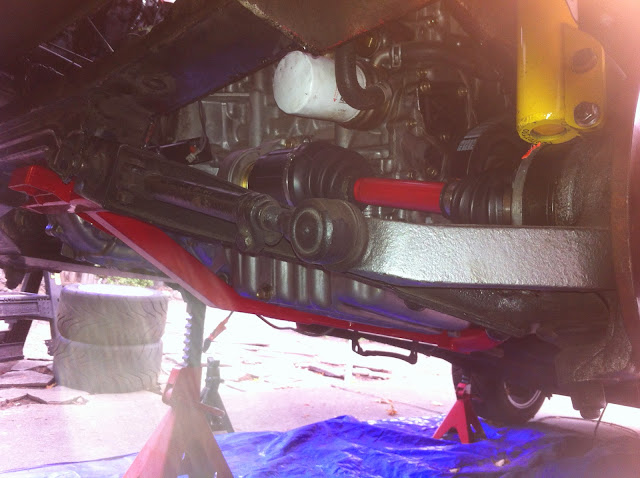 MWB had warned of severe droop in the axles when the car is lifted and wheels are left on. I already have a set of custom adjustable rear coil-overs on the X and I didn’t see any serious droop with the car up. Otherwise they suggest you have tender-straps installed to suspend the axles/wheels, relieving stress on those components.

One thing I noted but didn’t pay enough attention to it at this point, was the axle impingement that was occurring on the passenger side when the car was completely on the ground and full load on the suspension. I didn’t realize I was binding an axle at this point. 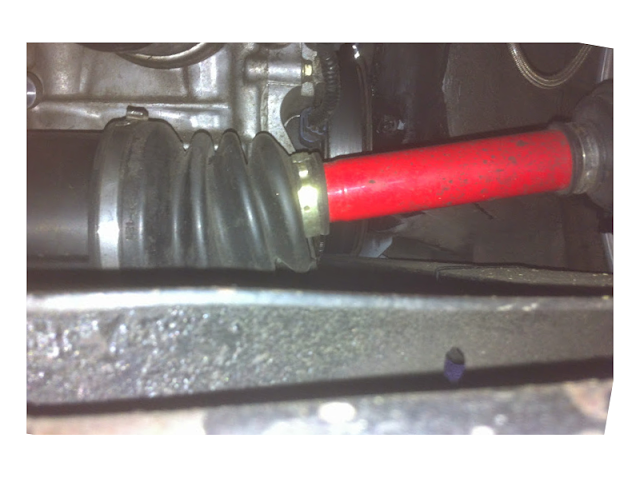 You can see the angle is pretty sharp. The driving symptom was a very mild rub/grind on right hand turns that would grow and was affected by the ride height – I first adjusted the coil-overs to increase the ride height to try and match the inbound and outbound CVs. My suspicion was on right handers, the axle was moving inward (like it should be able to) but the transaxle side tri-pod inner bearings didn’t have enough angle to turn freely so would bind.

Some posts on xwebforums.org by a couple of other K20 swappers showed me I clearly had something wrong from the get go with the geometry. Another member pointed out how he did his engine mounts when first fitting the engine. You need to know first that there are 4 mounts, 3 on the engine cradle and 1 on the passenger side engine bay. The 4th one you tack weld in while the engine is in on the cradle. What was pointed out was that I did not support the engine beyond the engine cradle itself when I tacked my 4th mount in. Others found the engine will droop some on the passenger side and jacking up that side of the engine before you do your tack/weld will make sure the engine stays level. Sure enough, after some careful measuring with a level, I could see my engine clearly was lower on that passenger side. Since I can’t remove and re-weld the 4th mount, I decided to shim it up and re-measure. This is what I did. 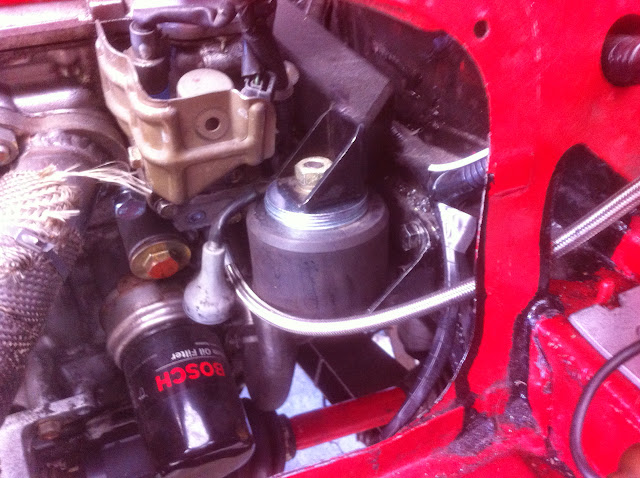 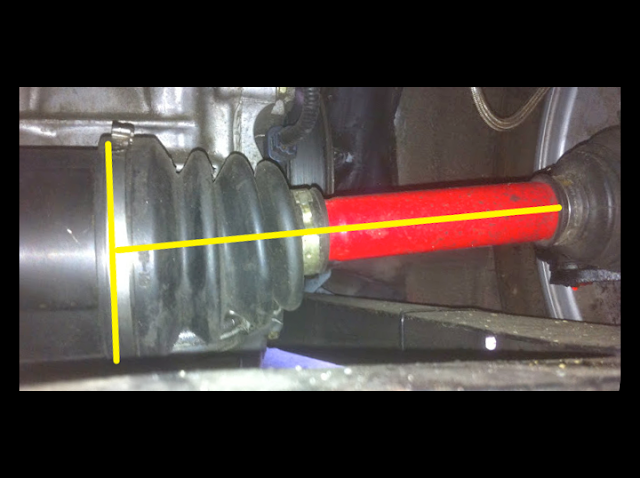 You can see the improvement made to the angle of the axle. The damage however, is done to the axle – I suspect to the inner CV. I will be repairing the axle soon.

I next tackled the custom shifter mechanism and cables. The MWB kit comes with a very well done shifter and cables ready to go. 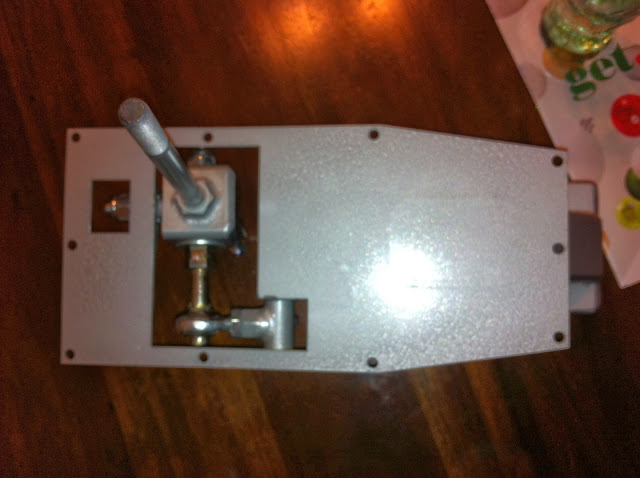 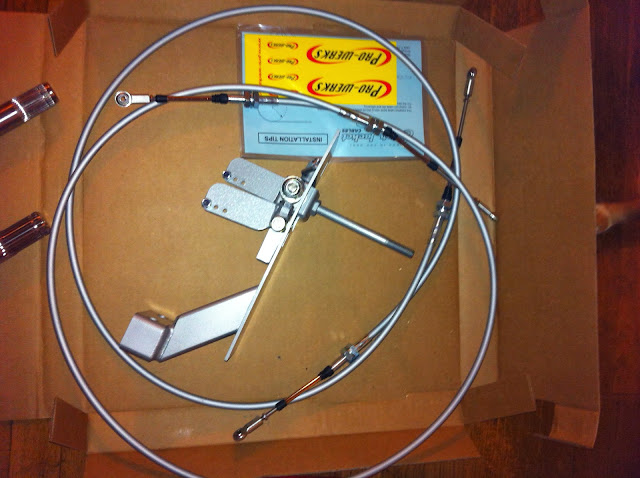 The shifter goes into the center console approximately where the stock shifter was. However cars with power windows will need to have up/down switches relocated in order to properly fit the shifter. 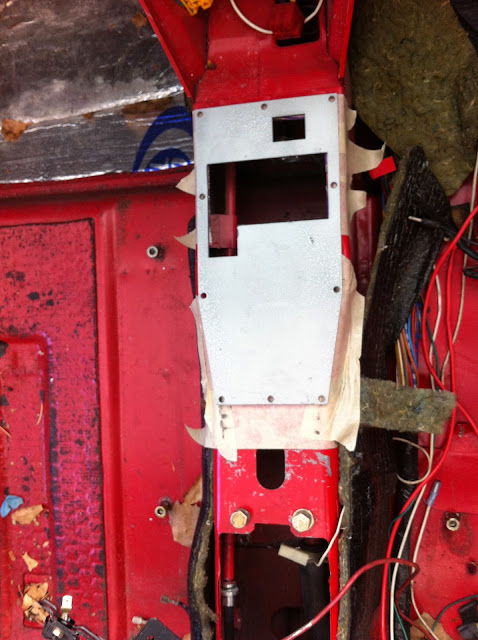 The shifter attaches to the chassis via small allen head bolts. I welded in some steel bar, then tapped/threaded for the 10 bolts which hold the shifter in place. 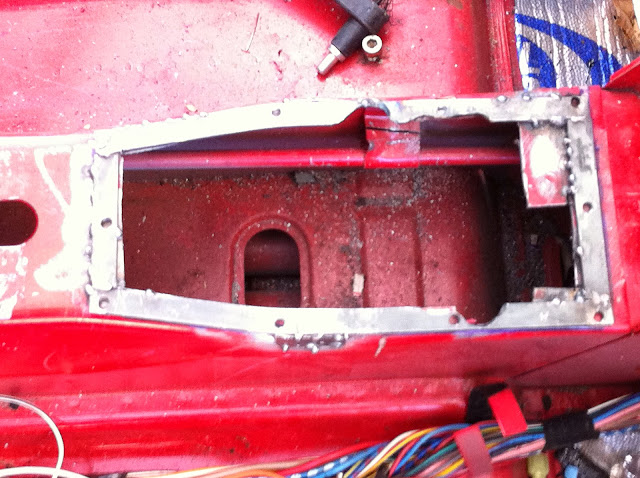 All done it looks fine. The one thing to make sure of: The inner sheath that holds the throttle cable in place did not work where it was (in my X). I had remove it and slide it close to the inside driver side wall in the center channel. You can see the red tube (Pictured above). 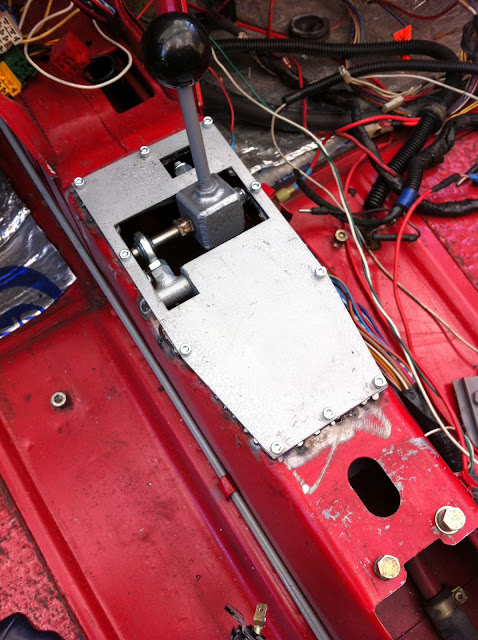 The shifter cables will attach to the pivot points of the custom shifter, run through the center tunnel and wrap under and around the engine where they connect to the transmission. The stock RSX transmission uses a pair of brackets to keep the shifter cables in proper place, however they will not work for this application without some modification: 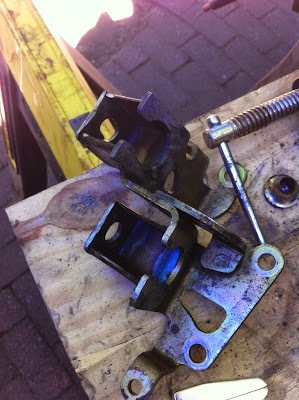 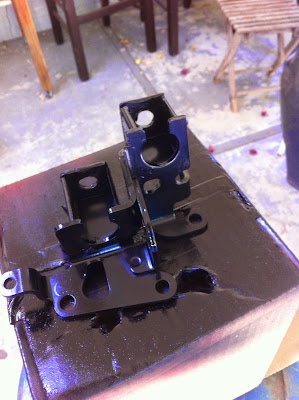 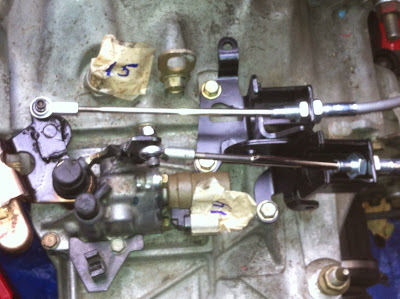 Next to tackle was the throttle body custom neck or tube. Due to the lack of room between the intake manifold and throttle body, it is recommended to install a tube that could attach the TB to the manifold and be able to clear the tight corner of the firewall which houses the fuel tank. With a pair of ends with the proper dimensions for bolt holes, etc. I was able to weld together a neck to the end pieces and test fit further. 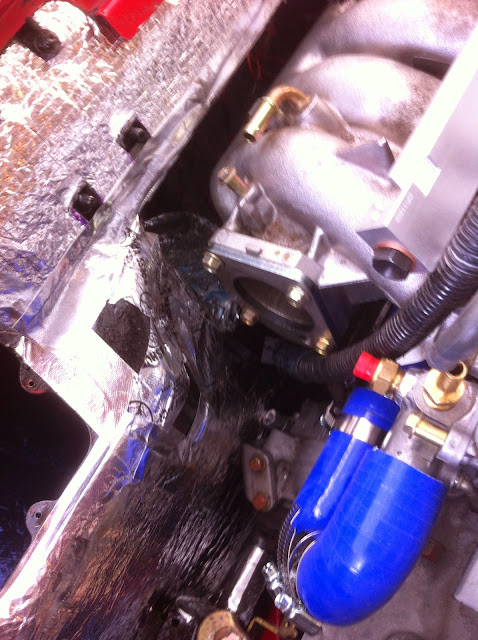 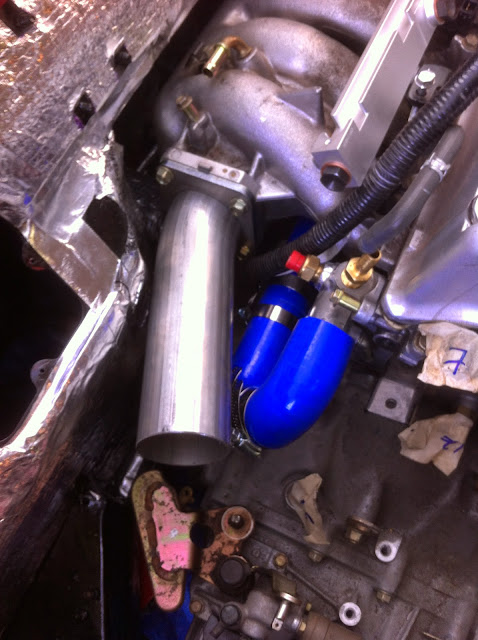 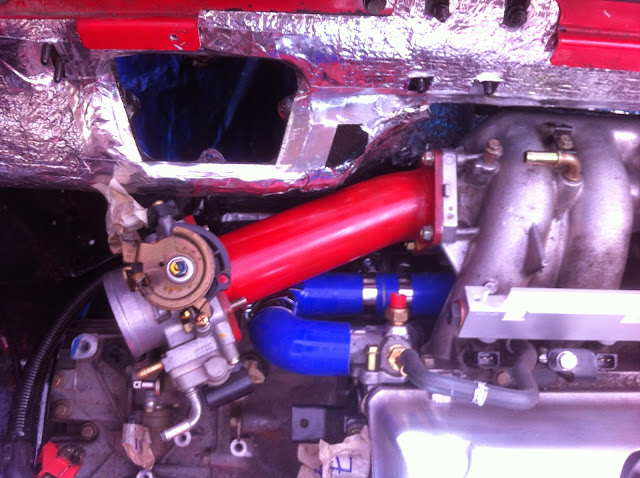 The next challenge was the exhaust. It IS a challenge simply do to the fact that it is 100% custom. I decided to have a local muffler shop do the work. This guy who has made me a few exhausts in the past and was eager to see what he can do with this one. I started by purchasing a evil-bay “shorty” header for the k20. 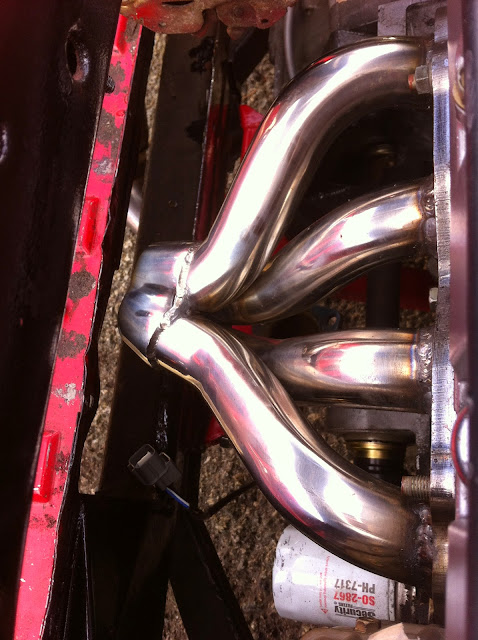 The header needed to be modified in a few places to work. First, it needed the collector section cut and shortened. Also needed the 4 header pipes cut so as to re-angle them to allow the collector to point toward the hole for the stock exhaust under the rear boot. You can see it in the pic above on the left. 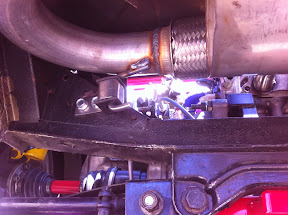 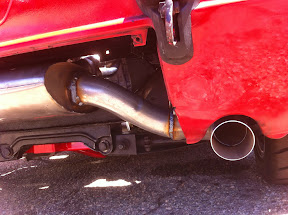 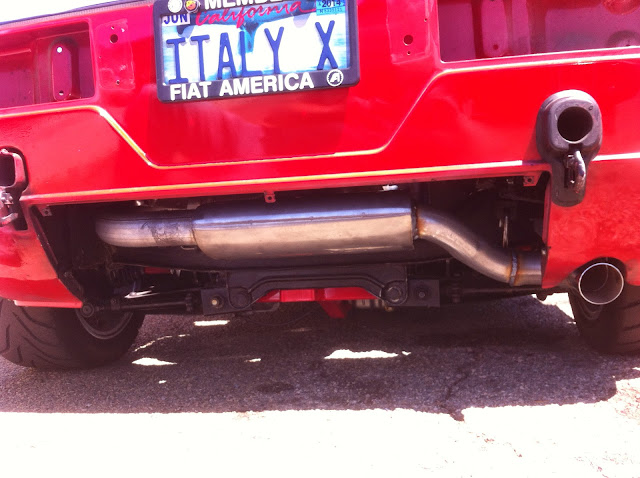 The choice of muffler was easy – the least noisiest. I have tried many aftermarket exhaust mufflers on many an X19 and the most common problem I find is with more/better flow mufflers comes more noise, usually in the form of 3-4k tach “drone”. I may play with some other muffler options at a later time, however this one seems to work very well.

So now the engine, transaxle, exhaust, shifter and cables were in, I moved back to the clutch and finalized the hydraulic line for the slave cylinder. The good news on the setup is that the stock master will work fine with the slave cylinder. Just need to re-plumb the lines some. I shortened the stock hard line, at about the point where it climbs up and around the under side of the engine bay frame-rail (around where a stock FI fuel pump sits), added a fitting to convert and allow a flexible line that routes to the cylinder. The problem however is the K20a2 6 speed transaxle’s slave cylinder is REALLY close to the firewall that sites in front of the gas take. I could have modified that section, maybe cut out section  to see how much room I had between the slave and the fuel tank. I didn’t of course and decided to knock the metal in a tad (between test fits) and adjust the plumbing to allow a banjo fitting. This worked out perfectly fine. 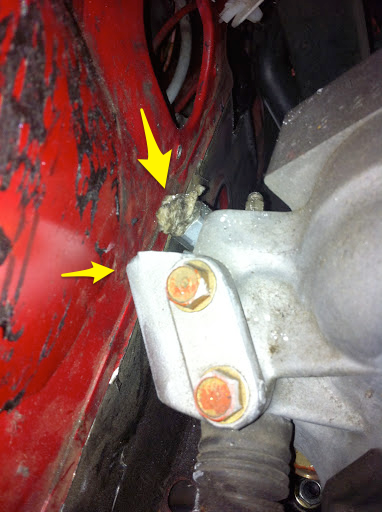 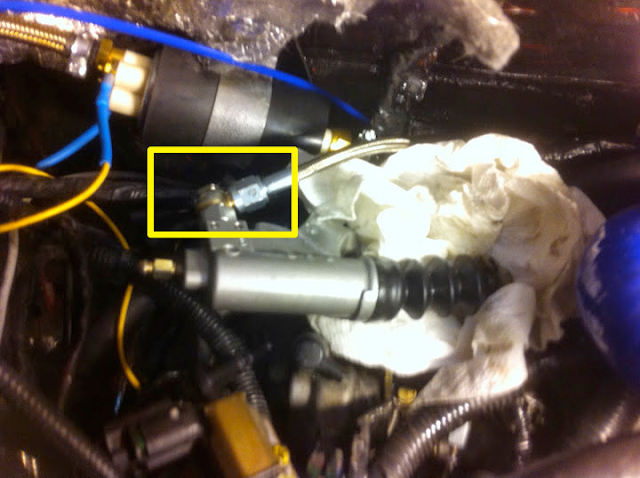 I was doing maintenance after installing, but here is pick of the flexible braided line and banjo fitting. I also modified the slave itself and removed some metal to allow the flexible line to be able to swivel 360 around to keep it from kinking any where should I reroute it later. Sorry no pics (will add later). MWB suggested modifying the clutch pedal to a shorter throw to keep the stock “feel” of when the clutch engages. I opted to leave as is. I didn’t notice any difference and if I did, I probably got use to it quickly enough that it didn’t bother me. If I had a second stock X19 perhaps it would have annoyed me enough to make it feel the same. But I don’t (yet).

Next: Install the fuel system, ECU and remainder of the electrical wiring.